Article by Gavin Ramsay, Astronomer at the Armagh Observatory and Planetarium

About 50 years ago a small number of blue stars (known as AM CVn stars) were discovered which showed variations in their brightness on a timescale of tens of minutes. After 30 years it was conclusively shown that this variation was a signature of their orbital period. Such short periods can be reached because both stars are white dwarfs. These dwarfs are the dying remains of stars, having a mass around half that of the Sun, but are as small as the Earth, making them very dense. Because the stars are so close together, material flows from the less massive star onto the more massive star through an accretion disc.

A visualisation of XMMJ0510-67 where material leaves the less massive star (but larger since it is made of ‘degenerate’ material) and impacts directly onto the more massive star. Credit: D. Steeghs / R. Hynes

Twenty years ago, two new X-ray sources called HM Cancri (HM Cnc) and V407 Vulpeculae (V407 Vul) were discovered which showed very distinct variations in their X-ray intensity on periods of 321 sec and 569 sec. Shortly afterwards, one of Armagh’s astronomers, Gavin Ramsay, made optical observations of these new X-ray sources and found that they both showed variations in their optical brightness on the same period as seen in X-rays. Further investigation revealed that these periods represent the binary orbital period. HM Can remains the fastest known binary and is small enough to fit into the volume of Saturn.

Objects like HM Cnc and V407 Vul are important since they are predicted to be strong emitters of gravitational waves. For this reason they make excellent ‘verification’ sources for the planned gravitational wave mission ‘Lisa’ which is expected to be launched into space in the next 20 years. They are also unusual in that unlike other AM CVn stars, an accretion disc is not formed and material slams directly onto the star without forming a disc. Such a process is highly unusual and can shed important light into the evolution of compact binaries.

Nearly 20 years after the discovery of HM Cnc and V407 Vul a group of astronomers discovered a new X-ray source called XMMJ0510-67 which showed X-ray fluctuations which were very similar to the two known sources. However, its period was 23.6 min which is 4.4 times longer than that of HM Cnc. Given the similarity of their X-ray profiles, Armagh’s Gavin Ramsay led another project to try and identify the optical counterpart of the new X-ray source. Along with an international team he used the European Southern Observatories ‘New Technology Telescope’ in Chile and the ‘Ultracam’ detector which was built by the Royal Observatory in Edinburgh. This detector is superb for identifying short period binaries since it is sensitive and takes practically no time to read out each image.

A comparison of the X-ray light profile of HM Cnc, V407 Vul and XMMJ0510-67. Although there are some subtle differences, they are strikingly similar and it seems highly likely that XMMJ0510-67 is an ultra-compact binary.

Ramsay’s team was able to identify a faint blue star which showed regular variations in its brightness on a period of 23.6 min – exactly the same time as the X-ray period. Since it is very faint it is going to be very difficult, however, to get optical ‘spectra’ of this star which would confirm that this period is the orbital period.

Nevertheless, given that its X-ray and optical characteristics are so similar to the shorter period sources, it is highly likely that it is. Since it has a much longer orbital period it can help us understand more about the direct impact process and how massive the two stars must be. Further observations of this exciting object are planned.

The full paper describing the work may be found at https://arxiv.org/abs/1806.02776 and it will be published in the journal Astronomy & Astrophysics.

I hope that it’s alright that I write about this with many of my clients,
this will help their perception of options significantly. 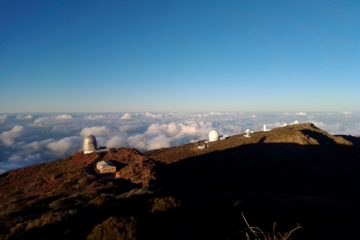 One the most common problems when someone begins doing research in Astronomy is the lack of previous observational experience with proper professional telescopes. Of course, the capabilities of these instruments are separated by an abyss Read more…

Astronomy in the News joins Armagh Observatory and Planetarium

Astronomy, and I’m sure you’d agree, is the most wonderous science of all. You are dealing with, literally, the biggest questions in the Universe from “how was the Universe formed?” to “Is there other life Read more…