Published by Courtney Allison on April 1, 2022

Welcome to April Stargazers! The month of April brings with it a new financial year, April showers (or snow showers?!) and of course plenty to look out for in our night skies. I’m going to walk you through what to look out for in the night sky over the coming weeks.

First, let’s start with some stargazing basics. Patience is key; you should always give your eyes around 20 minutes to adjust to the low levels of light when trying to look out for things in the night sky. This means no screens and phones too – all that blue light will impact your eyes as well.

Also, the lights from our houses, cities and cars can interfere with how much we can see. If you live in a built up area with a lot of light pollution, you will not be able to see all that our skies have to offer. Even driving 10 minutes outside of your town can make a huge difference in what you can see. However, even if you can’t travel to stargaze, you should still be able to see most of what I will cover today.

April brings with it the opportunity to spot a planet in the early morning sky – Venus! 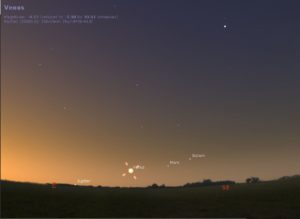 This time of year Venus is nicknamed the “Morning Star” as it greets early risers in the South-eastern portion of our sky. It is best viewed between 5am and 6am, so at least if you have to get up super early you won’t be alone! Venus will appear as a particularly bright star to the naked eye, but it is of course a planet. 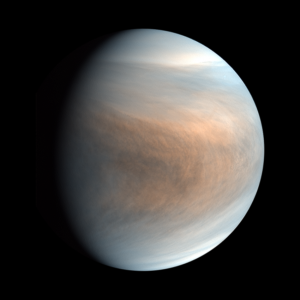 Venus is so bright and easy to spot because of its very thick cloudy atmosphere – 65km thick to be specific. It reflects the light of the sun very well. 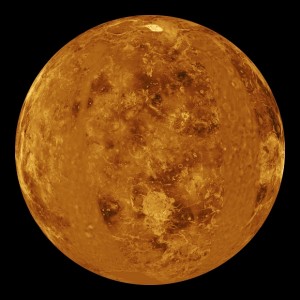 Venus is the second closest planet to the sun and is the hottest of all due to its thick clouds filled with greenhouse gasses. The clouds trap in the heat of the sun like a big winter duvet, and thus Venus is twice as hot as an oven. It looks so serene from Earth – but this is misleading. Keep it at this distance, thank you!

Now, normally here at AOP we are not in the habit of coming up with date night ideas, however you can’t go wrong with this classic. Take a flask of hot chocolate, a warm blanket and keep and eye out for the Lyrids meteor shower. Meteor showers are best viewed from an area of minimal light pollution to ensure the best possible viewing. 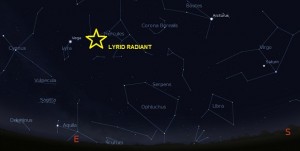 The Lyrids get their name because they appear to radiate from the constellation of Lyra the Harp. The constellation of course does not create the meteor shower – long period comet Thatcher does. Meteors are small chunks of debris left in the wake of some celestial objects, like asteroids or comets. When the Earth passes through this trail of material, it scoops up a number of these pieces which fall into the atmosphere. As these small chunks zip through the sky they burn up, projecting bright streaks of light across the sky – and we get meteor showers! 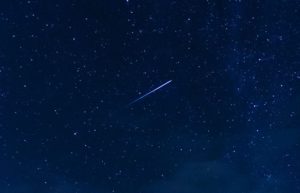 The Lyrids will be active between the 14th and the 30th, and will peak on the 22nd.  You can see about 18 per hour at the peak.

The full moon in April is known as the Pink Moon. This year, it will be on the 16th. Now, the moon won’t actually be pink. The name “Pink Moon” came from the moon’s association with the pink springtime blooms that appeared at the same time.

With Winter hero constellation Orion now disappearing from view in the springtime, our skies in early spring are now dominated by Leo! 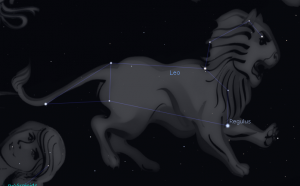 Leo is the Nemean Lion, which was killed by Hercules on one of the 12 labours he had to perform for killing his family. According to Greek mythology, the lion that terrorized the citizens had a hide that could not punctured by iron, bronze or stone. Having broken all of his weapons fighting the man-eating lion, Hercules finally strangled it to death and placed it in the heavens as one of his conquests. Image Credit: Heather Alexander, Stellarium

Leo is of course one of the signs of the Zodiac – it also happens to be my own Sun sign. It is quite a large constellation, and is thankfully easy to spot due to the help of an asterism. 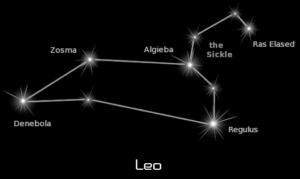 The Sickle in Leo. Credit: EarthSky

An asterism is a collection of stars that isn’t an official constellation. A very famous asterism is The Plough! The asterism to help you find Leo is called The Sickle, which looks a bit like a backwards question mark.

Within Leo, with the help of a telescope, you can spot the Leo Triplet. This is a group of 3 galaxies located about 35 million light years away from Earth. To find them, look in Leo’s hindquarters. The galaxies are M65, M66 and NGC 3628. 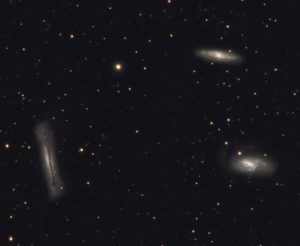 So there’s an overview of what you can spot in April! If you see anything cool, please send us pictures on our social media channels. Good lucky stargazers!

Hello Stargazers! We are well and truly into spring now (and hopefully we have all recovered from losing that 1 precious hour of sleep when the clocks sprung forward, eh?). The high pressure weather system Read more…