So, party season is over and we’re looking towards a long, cold January before the weather starts to heat up again. However, January is a great time to go stargazing as the nights are long and we can start our lookout in the late afternoon. Not to mention that the stars of the winter night sky are some of the most spectacular of the year, with loads of interesting things to look out for. The full moon this month happens right at the start of the month, on the evening of the 6th of January. The January full moon is often given the name ‘wolf moon’ after the hungry wolves that would howl at this time of the year. These names that were given to the moons of each month tend to have been used by various cultures, including Native Americans and Medieval Europeans, although this name is probably of Celtic origin. Other names for the January full moon are the quiet moon, or the stay home moon (my favourite of the bunch – always ready to have a duvet day).

The moon’s orbit around the earth takes about a month, which means that once we see the full moon, the new moon will follow roughly two weeks later. So the month carries on, the moon appearing smaller and smaller each night (waning from full, to gibbous, to crescent) before finally, on the 21st January, we have the New moon. At this point, the side of the moon that is lit is facing away from the Earth, and so while we see the same side of the moon we always see, now it is not illuminated by the light of the sun.

And from then on, the moon starts appearing larger again (waxing)! And the cycle continues on throughout the year.

But the moon is far from the only thing to look for in the sky this month, and so we shall move swiftly on to the next, which is a sign of the zodiac! 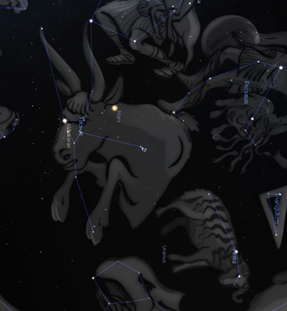 An image of Taurus, rotated. You can see Mars and The Pleiades. Image Credit: Stellarium

Taurus is probably familiar to you as one of the signs of the zodiac, and you may be aware that Mars currently appears to lie within the boundaries of the bull constellation. The reason that this constellation was named Taurus after the bull is its long ‘horns’ at the top of the constellation, giving it its distinctive appearance. Not only this, but the bull has a glowing red ‘eye’ made up of the constellation’s brightest star. The star in question is called Aldebaran, which is derived from the Arabic for the follower – referring to the fact that the star appears to follow a nearby star cluster through the sky.

Aldebaran itself is a red giant star 36 light years away from the sun. It is over 40 times the size of our sun, so despite having a much cooler surface temperature (3900K, compared to 5800K of the sun), it has a luminosity over 400 times that of our sun. This means that it is on average the fourteenth brightest star in our night sky.

The constellation of Taurus contains a few interesting objects, including the object that has the distinction of being Messier 1 – the crab nebula. It was the first object that Messier discovered and put in his catalogue of comet-like objects. It is also the first object described that could be traced back to a recorded historical supernova explosion (the SN1054 supernova recorded in China in 1054). It was first drawn in Ireland, where they had a largest telescope in the world at the time, at Birr Castle by the 3rd Earl of Rosse. He thought it looked kind of like a crab when he drew it, hence the name. 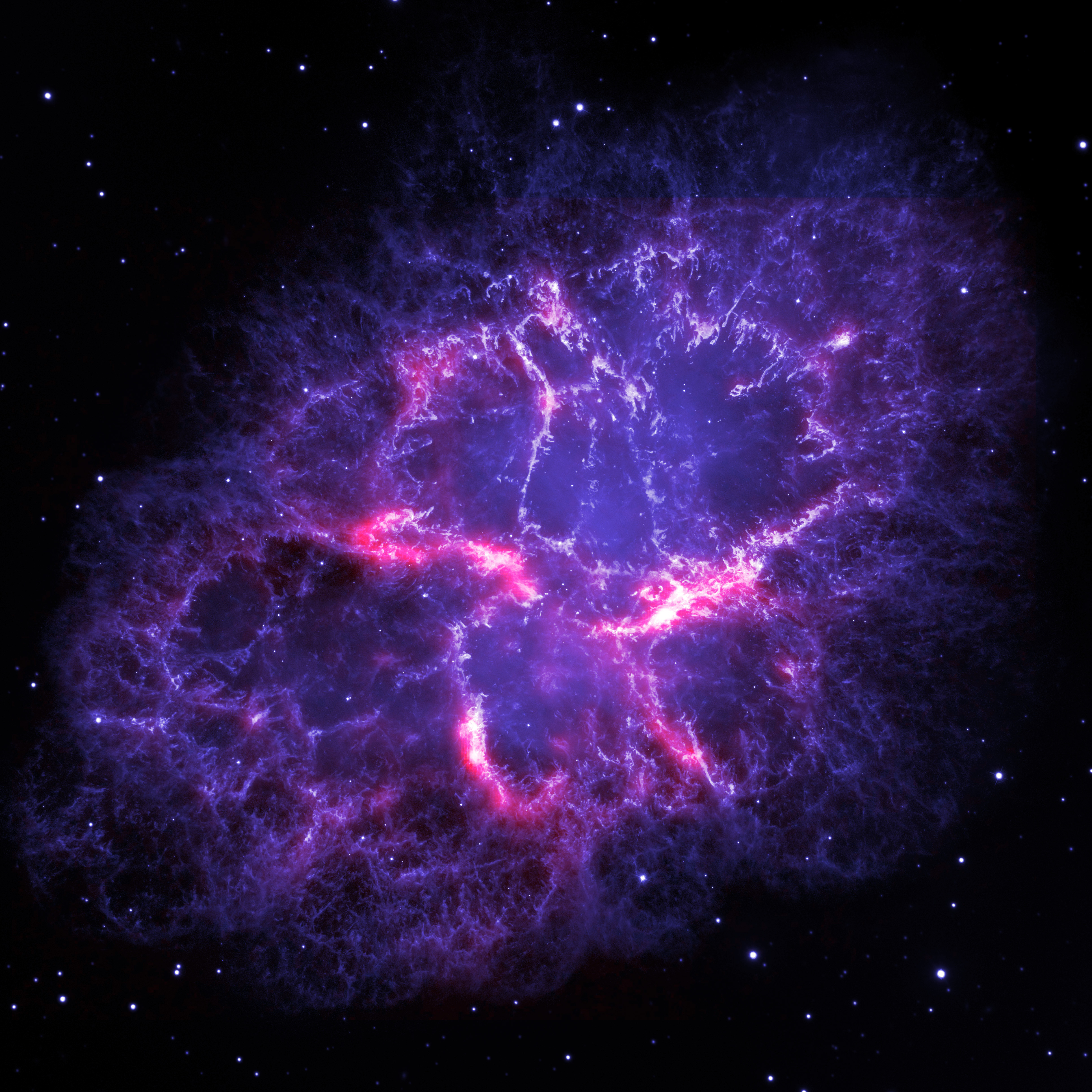 The crab nebula even has a pulsar within its limits! A pulsar is a fast spinning neutron star – and this one was the first pulsar to be connected with a supernova remnant.

The star cluster that Aldebaran appears to follow rises in the sky just before Aldebaran itself, and is known as the Pleiades cluster. It can also be referred to as the seven sisters, after the seven daughters of Atlas. The reason for this was that in ancient times and even up until quite recently, there were seven clearly visible stars that made up this cluster. Nowadays however, except for in remote places, there may only be 5 or 6 stars in the cluster that are clearly visible to the naked eye. This is due to light pollution, which has become a serious issue in many parts of the world, particularly places near cities.

Light pollution makes it harder to see the stars in our sky, of course, and affects astronomers and amateur stargazers when they are trying to observe. It means that many people and wildlife are disturbed and affected. Too much light can cause circadian rhythm disruption in both animals and humans, and this can affect our rest – potentially increasing tiredness, fatigue, anxiety and stress.

Excessive light can affect animals and plants in other ways as well – for example,  many plants know when to flower by the presence of a hormone that is only created in the dark – if there is no dark period of sufficient length the plant will not be able to flower. Animals too are not immune to the bright city lights – some birds migrate in the dark and the lack of it will at best disorientate them, and at worst prevent them from migrating at all. Turtles also navigate towards the sea by using the position of the moon, and if there is a bright light in the area they can mistake it for the moon and head towards it, usually into a city, where they will likely get run over or predated upon.

Oh, I got off track there a bit – we were talking about the Pleiades. The stars that we can see of the Pleiades cluster are not the whole story. The Pleiades is an open cluster, containing thousands of stars all around the same age, and is actually the nearest Messier object to the earth at 444 light years away. It is also one of the nearest star clusters to Earth. The Pleiades is a cluster full of hot blue stars, most only 100 million years old. 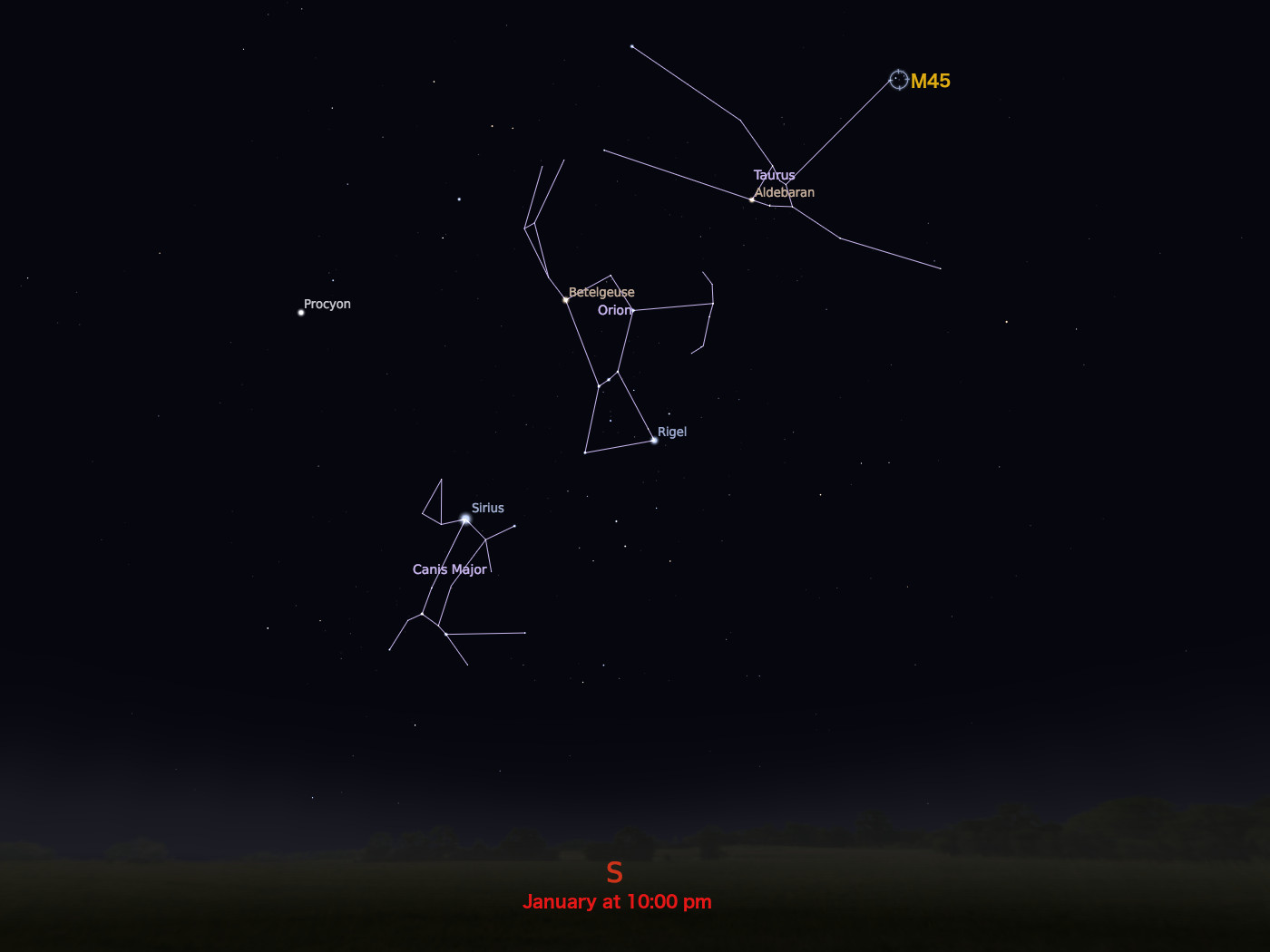 The Pleiades – Messier 45 next to the constellations of Taurus, Orion and Canis Major. Image Credit: NASA.

The name Camelopardalis seems like a mouthful, but all it means is giraffe! It comes from the word for camel, ‘camelo’ and ‘pard’, which was also used in the word leopard, meaning spotted. (This is because when the first colonisers of Africa saw giraffes, they thought giraffes looked like spotted camels – which they sort of do.) 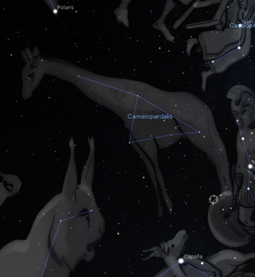 Camelopardalis is a large constellation, but not very bright, with stars of only fourth magnitude brightness. The brighter the star, the lower the magnitude, with the brightest stars going into the low negatives. So nothing spectacularly bright in the constellation of the giraffe; however it does have a few interesting stars and even deep sky objects.

Alpha Camelopardalis (shortened to α Cam) is a blue supergiant star, 6000 light years away from the Earth. This makes it one of the most distant stars visible without a telescope.

β Cam is the brightest star in the constellation of Camelopardalis and it turns out that what appears as a single star, is in fact a double star system! The stars have an apparent magnitude of 4.03 together, but the first is magnitude 4 and the second magnitude 8.6.

The deep sky objects within Camelopardalis are many, due to the fact that it is facing away from the galactic centre where everything gets a bit dusty and muddled. One of these deep-sky objects is Kemble’s Cascade – within the open cluster NGC 1502 there is a parade of stars all lined up in a row, to form an asterism within the constellation. Its beautiful to look at, and well worth a stargazing session!

The moon will end the month by flying past Mars in the night sky – coming closest to the planet on the 30th of January. When two planets (or the moon and a planet) appear to come near each other in the sky we call it a conjunction. Obviously, the planets are not actually coming close together in space, but they will line up with each other occasionally from the perspective of us little ants on the surface of the Earth. We actually have a few conjunctions in store for us in January – There is the moon and Mars at the very end of the month, but before that we have a few lunar and planetary conjunctions. Some are a little harder to see, though, you’ll need to be careful to catch them! And while some are possible to view in the night sky, some are simply too dangerous to look at, as they are right next to the sun! 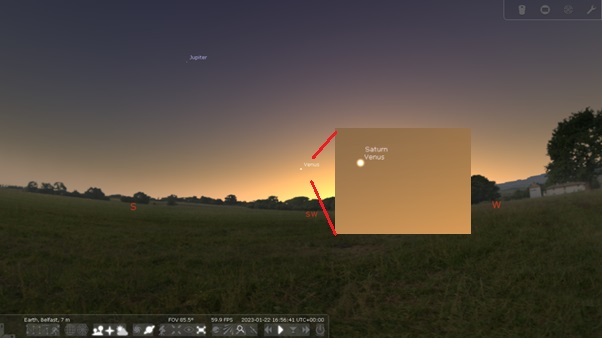 Apart from that, fly free with your stargazing this season, wrap up warm and take a look out for some of the most spectacular stargazing of the year!