Published by Armagh Observatory and Planetarium on September 8, 2014

When we think of the constellations of this time of year, Cygnus, Lyra, Aquila and Hercules are first to come to mind. However there are other overlooked constellations out there, some even hidden inside the Summer Triangle. Let’s go out about the middle of September and look to the south.

A little northeast of Aquila the Eagle lies the little group of five stars forming Delphinus the Dolphin. This is one of the Classical constellations listed in Ptolemy’s Almagest in the 2nd century AD. The story behind it concerns the Greek poet and musician Arion (c 7th century BC).  Arion was travelling across the Mediterranean when the crew of his ship conspired to steal his money and abandon Arion to his fate in mid-ocean (I note in passing that this type of outrage continues even in the 21st Century).  Arion’s last wish before being cast overboard was to be allowed to sing. His mournful song attracted a pod of dolphins, and when he was flung into the water, one of the appreciative dolphins carried Arion to shore. There are enough authenticated accounts of dolphins interacting with humans for this story to be possibly true, but it is unlikely that Arion rode on its back as depicted in the art of more than two millennia.

Even though there are no bright stars in the constellation, it can readily be seen. It looks like a diamond of four stars with a fifth forming a tail. Rather than a majestic dolphin, the aquatic creature the whole thing resembles most is a tiddly little tadpole. The rhombus of four stars in Delphinus form the asterism called Job’s Coffin although no one is sure why it is called this.

The four stars making up the Coffin are Sualocin, Rotanev, Delta and Gamma Delphini.  Delta and Gamma Delphini are normal Bayer designations but Sualocin and Rotanev sound a little odd. Reversing them reveals Nicolaus and Venator. Now Nicolaus Venator sounds like a great name for a fictional villain but who was he and how did he get into the sky? The answer exposes the remarkable chutzpah of Italian astronomer Niccolò Cacciatore (1770 – 1841) who craftily inserted a latinised and reversed version of his own name into the Palermo Star Catalogue (1814) which he was largely responsible for compiling. Supposedly it was years before any other astronomer noticed what Cacciatore had done. Cacciatore seems to have been an accomplished astronomer, he was director of the Palermo Observatory for more than twenty years, in that time he had to rebuild the observatory after it was destroyed in a revolution, yet today he remembered only for his little jest.

There is little to say about the stars of this little constellation. Most interesting of the bunch is Gamma Delphini which can be seen to be a double star with a small telescope. The listed primary, an F-class star appears gold in colour and its companion is a K-class orange subgiant. Actually the subgiant is the more massive of the pair so is the true primary in the system. The pair lie about 102 light years away from us.

Tinier and fainter even than Delphinus is Equuleus , the foal. It is another of the 48 constellations listed by Ptolemy, and is the second smallest of the modern constellations (to put you out of your misery, Crux is smallest of them all). Myth0logically speaking , Equuleus may represent the foal owned by Castor that was the offspring or brother of the winged horse Pegasus. The constellation Pegasus is just beside Equuleus so the pair can keep company as they trot across the sky with Equuleus leading the way. The brightest star in Equuleus is Alpha Equulei (Kitalpha) which is approximately 186 light years distant.  Its name is derived from an Arabic phrase meaning “a piece of the horse”

Another little but clearly defined constellation Sagitta, the Arrow, is just beside Delphinus to the west. It is shaped like a “Y” on its side, resembling an arrow with pronounced fletchings. Another constellation listed in the Almagest, this is one of the tiniest of the modern 88 constellations. Its brightest star is Gamma Sagittae an orange K-type giant approximately 274 light years from Earth. Sagitta has nothing to do with Sagittarius (the Archer), there are several myths telling why there is an arrow in the sky, one says it was fired by Hercules to slay an eagle (Aquila perhaps?) sent by the Zeus to torment the titan Prometheus  who stole fire from the gods and gave it to humanity. Like most ancient gods Zeus had a knack for dreaming up sadistic tortures matched only by modern comic book writers (you know who I mean). Prometheus was chained to a rock and suffered the eagle cruelly tearing out his liver daily in an endless cycle of agonising mutilation and torture  (luckily for Prometheus the Titan, Ridley Scott’s moronic movie Prometheus (2012) was yet to made in those ancient days or he could been forced to watch it over and over again as a punishment).

Above Sagitta skulks Vulpecula the Fox. This obscure constellation does not date to ancient times and in fact if you to have asked Claudius Ptolemy about it he would have responded with a “Huh?”  That is because Vulpecula was added to the celestial bestiary by Johannes Hevelius (1611-87) in the late 1600s. However putting a rascally fox in the heavens was not enough for Hevelius. The astronomer originally put a goose up there too and the constellation was known  as Vulpecula et Anser (“the little fox and the goose”).  Sadly for the goose this was no buddy act as the goose was depicted as hanging from the fox’s jaws.  Time has streamlined the constellation and the goose has gone but it is still remembered in the name of Alpha Vulpeculae which is Anser ( Goose). Anser is a red giant about 300 light years away.

Vulpecula is home to one remarkable object, M27, the Dumbbell Nebula .  Discovered by Charles Messier himself in 1764 this is a large planetary nebula about 1360 light years away. Some folk can see this nebula with binoculars but this is beyond me, I am afraid that a telescope is necessary to see its double-lobed shape which always reminds me of an apple core.

Apart from the constellations, there are planets on display this month. Trying looking west after sunset for Mars and Saturn in the darkening sky. If you are an early riser, giant Jupiter climbs over the eastern horizon shortly after 3 am flanked to the east by the showy stars of Gemini,  Canis Major and Minor  and Orion. 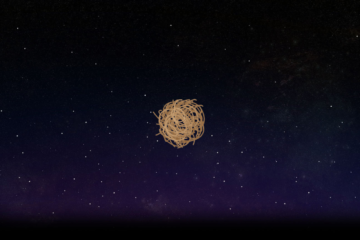