Well, folks, the nights are drawing in again and it really feels like autumn now. The autumn equinox has come and gone, and we are slowly heading towards the winter solstice; the very shortest day of the year. First to come though we have events to celebrate, such as Space Week, and my very favourite holiday, Halloween! 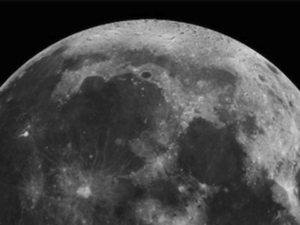 This month we are treated to the Hunter’s Moon, named by the Native Americans as this was the time of the year that provisions were gathered to weather the long cold winter ahead. Alternative names are the Ice or Freezing Moon (named for the weather), and the Migrating Moon (after the fact that birds would start to head south for the winter at this time of year). However, these moon names aren’t scientific, merely an interesting look at the way months have been tracked in the past.

The full moon this October is near the beginning of the month, rising close to sunset on the evening of the 9th, but still not early enough to brand October’s full moon as the Harvest Moon (my favourite Gameboy game, and the full moon closest to the Autumn equinox). 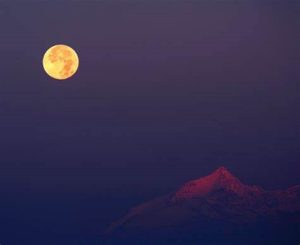 There are a number of planets visible in the night sky this October, and you can see these just like stars in the sky with the unaided eye (Uranus and Neptune are the only planets too far away to see with the naked eye, though, so don’t expect to see these two without a telescope!). The difference between planets and stars is that the stars in the night sky twinkle (or scintillate if you want to get fancy), while the planets do not. This is due to the relative distance of the planets compared to the stars. The planets are much closer to us here on Earth than any of the stars are (apart from the sun, of course) and so they can be treated differently based on that.

Stars twinkle in the night sky for a number of reasons, all to do with variations in the Earth’s atmosphere as the light passes through. Stars can be considered a point source of light, which means that the whole light is refracted as it enters the Earth’s atmosphere. This means that the star appears to twinkle in the night sky due to refraction. Planets, on the other hand, can be considered discs of light (or a lot of point sources together). What affects one of the point sources may not affect the rest (or what affects one side of the disc may not affect the other) and so the planets’ light, in general, doesn’t twinkle. 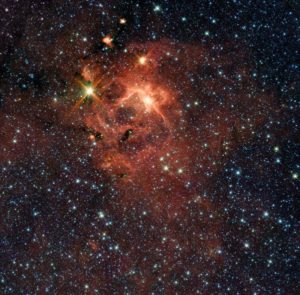 But, back to the planets that are visible this month in particular. The moon performs a close flyby of both Jupiter and Saturn in the South of the sky early this month; Saturn on the 5th and Jupiter on the 8th. In fact, both planets are visible almost all night throughout the month, giving us a good view of the two gas giants. Break out a pair of binoculars or a telescope to see them in even more detail – you might even be able to spot Saturn’s rings and Jupiter’s Galilean moons! It’s a good chance to do some stargazing, and it’s even during Space week! 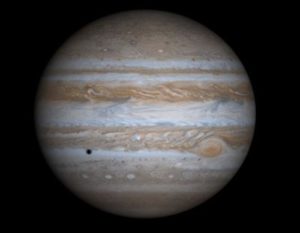 If you are into astrology and frequently look at your horoscope, you may be familiar with the phrase ‘in retrograde’. Saturn is in fact in retrograde for most of the month of October. But what exactly does this mean, and how does it link to science?

Way back when, astronomers noticed that the planets (the ones we could see, anyway) moved through the sky and were visible at different times throughout the years. Due to this they named the planets ‘planetae’, meaning wanderer. However they soon noticed that the planets didn’t move in a simple way, and in fact they seemed to change direction at certain times and travel back on themselves. This gave the astronomers pause, and some of them suggested that perhaps the planets weren’t on simple circular orbits around the earth, but traced out smaller circles within the circles, which they called epicycles. It turned out of course, that they were right about the planets not going around the earth, but it took Nicolaus Copernicus and a few years of lobbying against the church for science to come around to the idea that the Earth wasn’t central to the solar system. And they were wrong about the reason too; epicycles were a fancy way of explaining something that didn’t need to be explained – once we’d cottoned on to the heliocentric (sun at the centre of the solar system) model, things started to make a lot more sense and the simple explanation started to work better. Epicycles are not the reason for the retrograde motion of planets, that had been seen for centuries.

So, retrograde is where the planet appears to change direction for a bit, from the perspective of Earth. Giving a motion pattern like this: 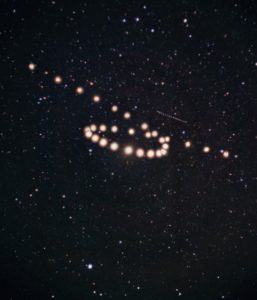 This pattern is caused by the earth essentially overtaking the other planet, as we are watching a planet move from a moving planet!

Saturn’s retrograde motion ends on the 23rd of October, when we’ll see it start moving from west to east again. 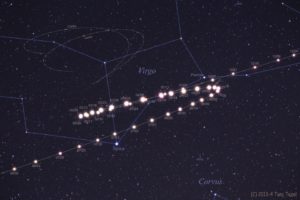 Jupiter and Saturn aren’t the only planets visible this October; Mars is also visible in the East of the sky this year. The red planet rises above the horizon at around 9pm in the evening of the first of the month and rises slowly both throughout the night and throughout the month, heading from the northeast to the southeast. Like it did with Jupiter and Saturn, the moon flies by the planet Mars on the night of the 14th Oct.

There are a number of interesting constellations visible in the night sky this October. One of those is Pisces, a sign of the zodiac and one of a few constellations in what is known as The Sea. This is an area of the sky that contains quite a few water based constellations – including Aquarius the Water-carrier, Cetus the Whale (or sea monster in some stories), Eridanus the River and Delphinus the dolphin. 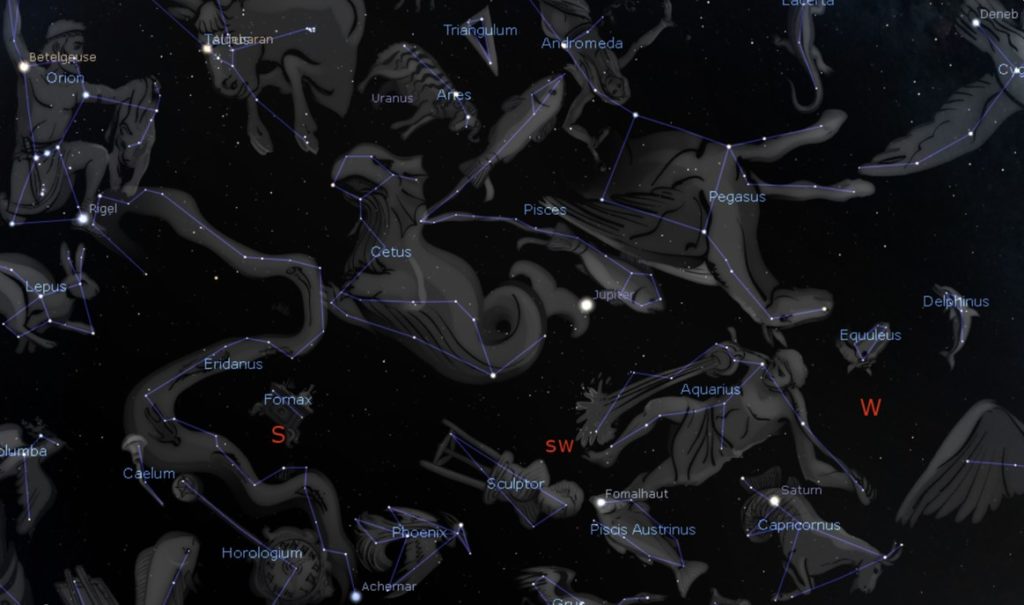 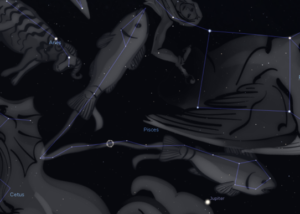 Pisces is a sign of the zodiac, which means that it lies on the line of the ecliptic. This is a line along which the sun, moon and planets appear to travel over the course of a year. So, your star sign is based on where the sun was when you were born.

So take a chance as the nights draw in to look outside at the stars. Its the best meditation there is!