The cold and dark nights have well and truly settled in, and if you’re anything like me you have the fire going every night and the kettle is never off! Oh, I do love a hot cuppa tea to warm my bones on these chilly and awfully miserable evenings… but on the bright side Christmas is only around the corner! But enough of this chat, it is time to get down to the nitty gritty and talk about the beautiful November Night Sky!

Let’s start with our natural satellite the Moon; our ever-constant companion in the sky. On November 8th there will be a full Moon shining brightly down on us earthlings. It is nicknamed the Beaver Moon, as this is the time of year in North America when beavers begin to take shelter in their lodges, having laid up sufficient stores of food for the long winter ahead. Sadly, for us here on the island of Ireland there is currently no evidence of beavers ever having been present, but hey – what a great nickname! Although bright and beautiful in the November night sky, a Full Moon will always make it more difficult to go stargazing as its glare drowns out most stars, making it a poor time for stargazing but a great time to view the Moon itself. So, make sure you get yourself outside on the 8th November and remember to take your binoculars and your woolly hat! 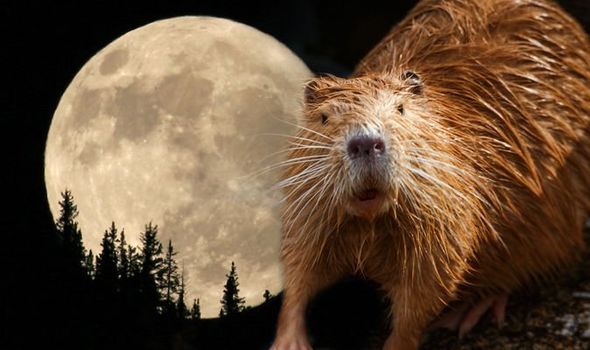 Up next, we are going to look at one very dominant constellation in the sky this November called Cassiopeia. If that name sounds familiar to you then it’s probably for all the wrong reasons. In Greek mythology, Cassiopeia had a notorious reputation for being a vain and wicked queen and often boasted about her own beauty, so much so that she claimed she was more beautiful than the lovely sea nymphs (all 50 of them). Revenge was sweet for the sea nymphs as when they heard the news, they got Poseidon, the King of the Sea, to send Cetus the horrifying sea monster to Cassiopeia’s Kingdom. Things didn’t get much better for the Queen as on her death, she was placed in the sky as a constellation close to the north star – condemned to circle for all eternity.

Coming back to the astronomy side of things, Cassiopeia is what we call a “circumpolar constellation” meaning she is visible all year round, never setting below the horizon – (remember condemned to circle for all eternity)! At this time of year Cassiopeia resembles the letter ‘W so is easy to spot and made up of only 5 stars. 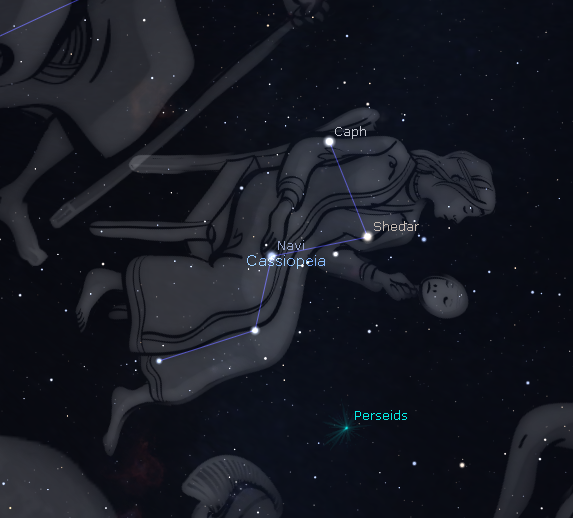 The vain Queen admiring herself in the mirror. Can you see the 5 stars of the ‘W’? (Image Credit- Stellarium)

Moving on we are treated to not one, but two meteor showers this November! When going meteor hunting, the best viewing experience is from a dark location away from the light polluted areas. There is no need for binoculars as the beautiful streaks of light are visible to the naked eye. The first meteor shower we can see this month is the Taurids Meteor Shower, which is a slow but long-lasting shower visible throughout most of the month. The shower however is expected to reach peak activity at around 18:00 on 12 November 2022 with a rate of 5 meteors per hour; sometimes meteor spotting can be a waiting game! The Taurids meteors radiate from the constellation of Taurus the Bull, hence the name! Meteor showers are caused when the Earth travels through a cloud of debris. In this case, the Taurid meteor shower is caused by the Earth ploughing through debris left behind by Comet Encke.

The next meteor shower we can see this month is the Leonids Meteor Shower, which is a little more active with 10 to 15 meteors expected per hour. Peak viewing will be between the night of 17th and early hours 18th November. This Leonids meteor shower gets its name as the meteors seem to radiate from the direction of Leo the Lion, but in reality, can been sky from any part of the sky. The Leonids occur when the Earth passes through the debris left by Comet Tempel-Tuttle. The comet takes around 33 years to make one orbit around the Sun.

Looking South we can see probably the most well-known star cluster visible in the sky, the Pleiades also known as the Seven Sisters. The brightest stars in the Pleiades cluster are named after the Seven Sisters of Greek mythology and their parents. Thus, the nine brightest Pleiades stars are Alcyone, Atlas, Electra, Maia, Merope, Taygeta, Pleione, Celaeno, and Asterope. However, it actually contains around 1,000 young hot stars. 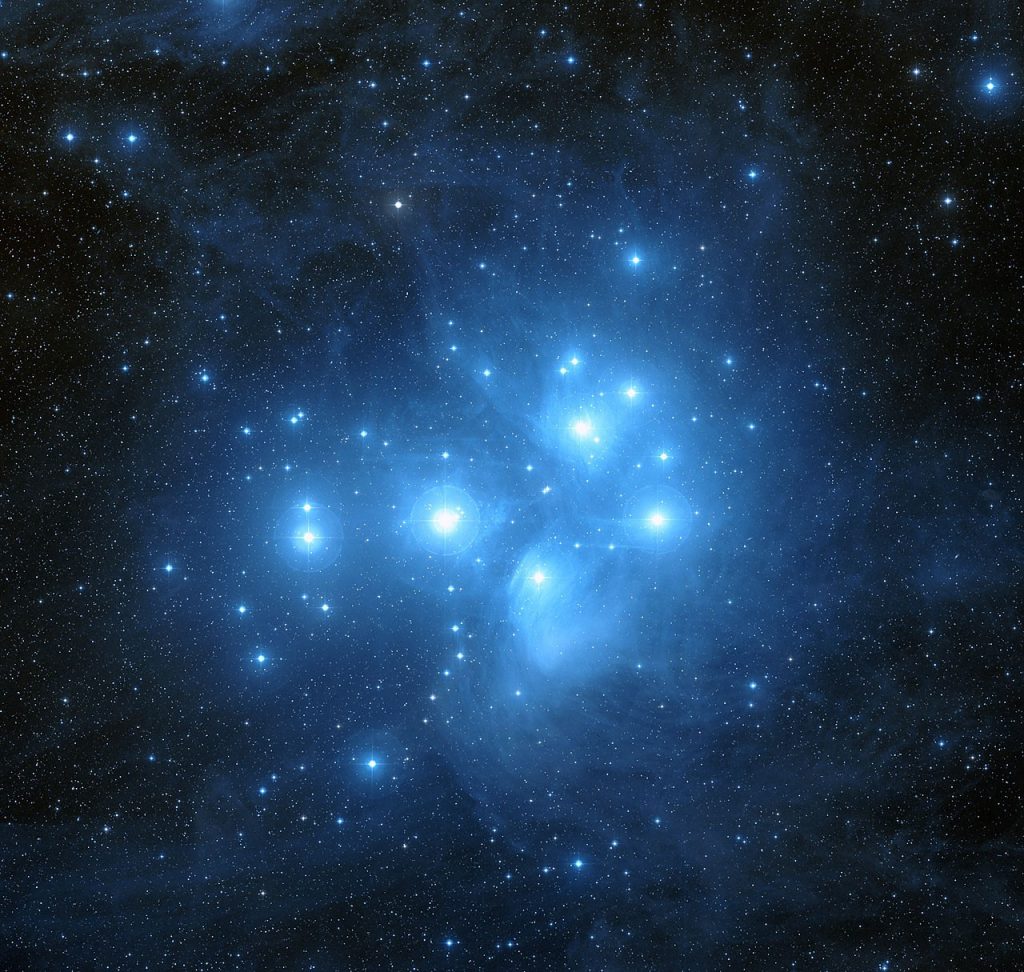 Pleiades Star Cluster is thought to have formed 100 million years ago and are approximately 425 light years away. Credit: Davide De Martin & the ESA/ESO/NASA Photoshop FITS Liberator

The Pleiades is among the nearest star clusters to Earth and is visible to the naked eye. It is located around 400 light years away and it can be found in the hunched back of Taurus the Bull. The Pleiades is a relatively young star cluster around 75-100 million years old, very young in astronomy terms, especially when you consider our star the Sun is 5 billion years old! From our perspective the Pleiades appear in the constellation of Taurus the Bull in the southern sky, and up to 14 stars can be seen with the naked eye if the conditions are right. Try and see how many stars you can count!

Another month, another lockdown. We have one very good outdoor socially distanced activity that everyone can do – stargazing! November does have a few meteor showers and interesting objects to see, so why not give Read more…

What’s up in the sky this November?

October is over and the nights are drawing in. Instead of lamenting the fact that we are driving to and from work in the dark, let’s think of the positives – more time to stargaze! And there’s plenty of interesting objects and constellations to look out for in November.

October is over, and November is now upon us. The days are definitely getting colder, the night are definitely longer, which means the time for gazing into the night sky is now! One of the Read more…