Published by Courtney Allison on December 7, 2022

Looking At The Stars

Festive lights to starlight might be the setting for us to relax to at the end of the year. During these darker months we might get the chance to see some stars a little more clearly with less light pollution from our own sun. But with all the extra lights around for the festive period, it is worth getting out of town when we want to stargaze. Going a few miles into the countryside should make it easier to see some celestial objects. We do recommend giving your eyes about 20-25 minutes to adjust properly to the dark.

You might want to bring a blanket; it makes things a little more comfortable if you are lying down to look at the stars (and it will probably be cold). Binoculars or a small telescope can help see more details in some parts of the sky, but aren’t strictly necessary as the night sky will hold many bright objects that can be spotted without them.

Firstly, we are going to look for some constellations that we can see this time of year. Starting with Orion the Hunter, one constellation that I find much easier to identify when I spot the asterism in the middle. An asterism is a pattern of stars that is not an official constellation. Like the Summer Triangle, with three stars that are each in their own constellation. But for Orion, I find it easier to see his ‘belt’ to then find the rest of the constellation (also three bright stars, but all of them are in the same constellation). Orion also has two of the top ten brightest stars in the night sky. These are Betelgeuse at number 10 and Rigel at number 7. 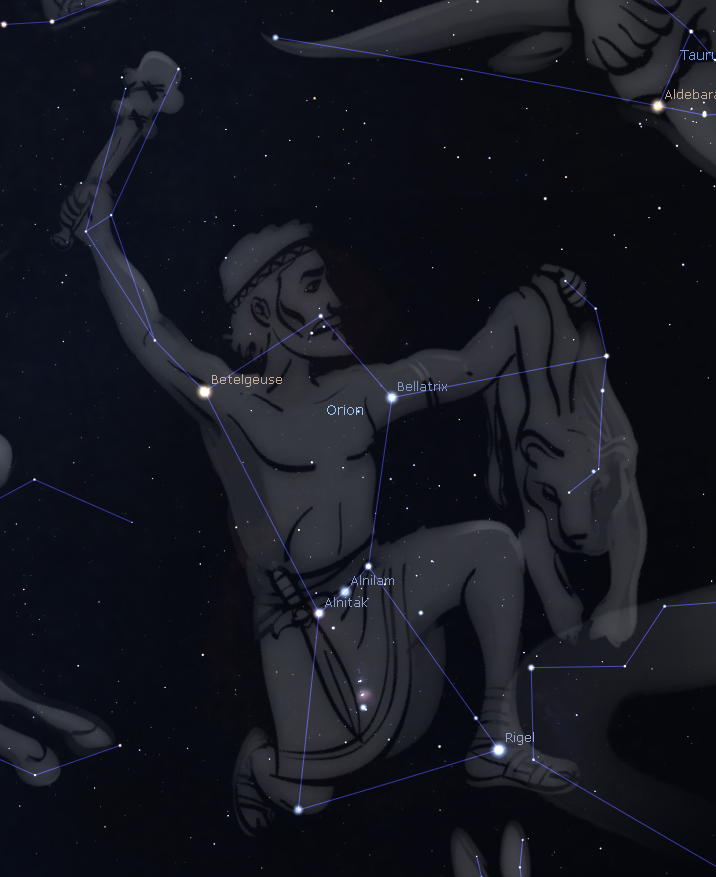 The three bright stars marking Orion’s belt and Betelgeuse and Rigel is easily visible in the sky. Credit: Stellarium 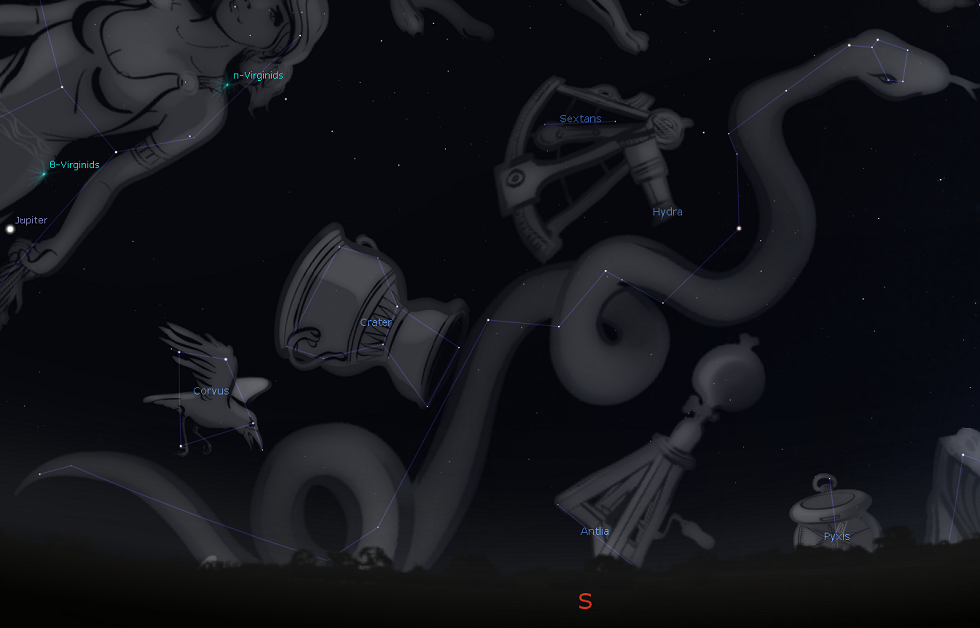 Deep Space, Events and Other Objects

During this month, with the help of a telescope or good binoculars, we can look out for some objects that are further out into space. Objects such as the appropriately named Christmas Tree Cluster (NGC 2264) high in the South Eastern part of the sky below the ‘feet’ of the twins in the constellation of Gemini. This will be later at night when the constellation is higher in the night sky. 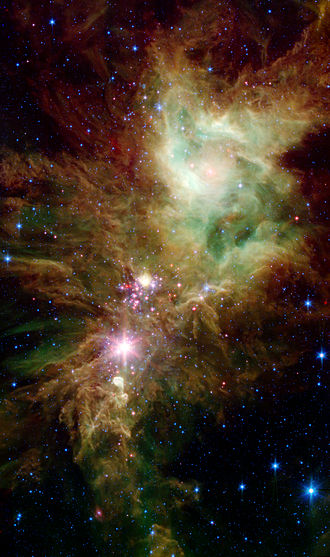 Since we looked for Orion earlier, if we turn back to the same asterism that helped us find the constellation. Below Orion’s belt we can see some extra features including the Great Orion Nebula (NGC 1976 or M42). In the same part of the sky at the bottom of the nebula there is a bright cluster of stars called the Lost Jewel of Orion (NGC 1980).

Next let us look further to the south. We can see Jupiter in the evening sky, which will appear very bright in the sky. This is, in  part, due to the position of Earth and Jupiter in each of their orbits. Jupiter will be ‘lined up’ in the opposite direction of the sun. With a good telescope you may be able to see some of Jupiter’s SEVENTY-NINE moons. These moons are the four Galilean moons called Io, Europa, Ganymede, and Calisto. 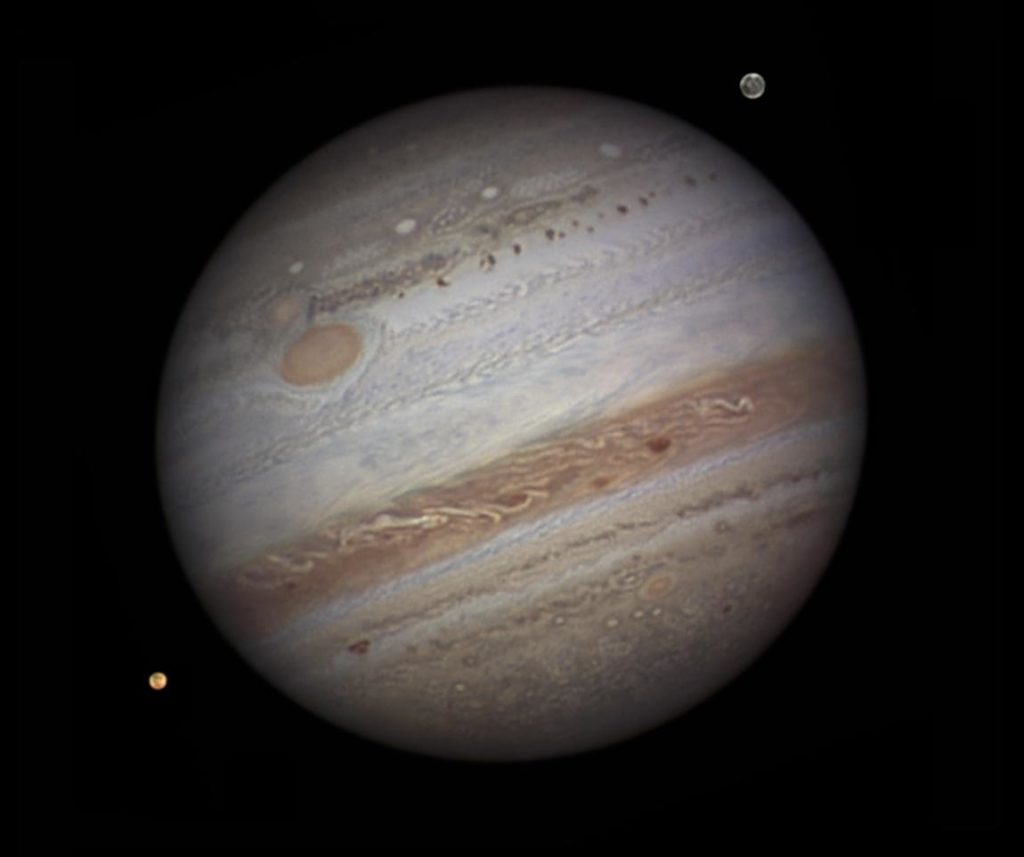 You may also get the chance to see the International Space Station (ISS) close to the horizon on the morning of the 22nd. It will be around 4:45am but will not be visible for the entirety of its short journey across the south-eastern part of the sky but it will be bright before it drops below the horizon.

There will be a couple of meteor showers during this month. The first will be the Geminids meteor shower that will peak around the 14th of December in the North-Eastern part of the sky, close to the horizon. Looking further north around the 23rd of December, shortly after the Winter Solstice (I will get to that, I promise) we can see the peak of the Ursid Meteor Shower. They are situated next to Ursa Minor, an important constellation as it is home to Polaris, and the best time to see them will be in the early hours of the morning before the sun starts to rise.

As the month ends and the New Year draws near we may also see Mercury and Venus in the evening sky at sunset on the 29th of December. Venus may look very bright as the clouds in its atmosphere reflect the Suns light.

The full moon will be on the 8th of December, so it will be a bit darker later in the month. This full moon is called the Cold Moon or Frost Moon. The moon will be high in the sky around midnight and visible if there is little to no cloud coverage. The Cold Moon comes from the association with long and chilly winter nights, while the Frost moon is a sign of the frosts to come as winter begins. The moon will be in the new moon phase for the winter solstice later in the month, which should make for some dark skies if it is a clear night. And while we are on the topic of the winter solstice let’s talk about it now…

The winter solstice for us in the northern hemisphere is when the North Pole is at its farthest point from the Sun. This event holds cultural significance across many places around the world, including Ireland. There are ancient sites that are lined up to celebrate either the Summer or Winter solstice. Places such as Newgrange in county Meath, Ireland are built to light up at the Winter Solstice. During this time we will experience the ‘shortest day’ of the year. Do not worry you won’t need to adjust your clocks for this. The day will still be 24 hours, but more of it will be dark than daylight. It’ll be a couple of days before we notice slightly more daylight, which will be nice during the winter months. So, if the sky is clear of clouds on the night of the 21st we might be treated to a longer window to stargaze. On this night Mars should also be visible high in our night sky if it is a clear night.

So the nights are drawing in and in as we get closer to the festive season, and though Christmas might not be quite the same as usual this year, there’s still plenty to celebrate. One great socially distanced activity you can do is stargazing! It’s outdoors and doesn’t require a group, and so you can easily go out and have a wee look up at the stars – just make sure to wrap up warm at this time of year!

Ah, the winter night sky, how we love thee. The shorter daytime means even longer to stargaze; if we are lucky here in Armagh we will get some high pressure days leading to crisp, clear, Read more…

What’s in the Sky this December?

The long cold dark nights have well and truly settled in, and now that it’s December it’s officially acceptable to say the C word. Christmas, Christmas is coming! And so is Santa Claus! Decorations are going up, there’s mad panic to buy Christmas presents and families are organising who’s having dinner and where. Ahh I love this time of year.