Welcome to the first article in our new series about the current state of flux our planet is in; Brandolini’s Law: Climate. We will explore the issues surrounding climate change such as how a debate formed around its existence, how climate change works, the effects it can have on a planet and how we can intervene. The Armagh Observatory has been taking weather readings since 1794, and so in conjunction with these fascinating records we have access to, we will bring you the full picture of climate change.

In this introductory article, we outline the sociological realities of climate change and why so many people still doubt its very existence.

Climate change is real; it is happening, it has happened and unless we change our collective behaviour as a species it will most certainly change beyond repair. Climate change has been acknowledged as a truth within the scientific community for years; despite discussions as early as the late 19th century that human emissions of greenhouse gasses could alter the climate of the earth, it wasn’t until the 1960s that carbon dioxide became a convincing foe to the climate. The watershed moment for public acknowledgement of climate change came from the testimony of a mild-mannered NASA scientist to a sitting of The United State’s Senate on 23rd June 1988. This scientist is James Hansen.

Hansen stated that he could claim with 99% certainty that the change in climate was caused by human activity. This statement seems obvious to us now in 2019, especially given the sheer volume of data collected demonstrating a global rise in temperature, but at the time Hansen was ridiculed in many circles. In fact, a fellow NASA scientist told Hansen the morning of his testimony that “no self-respecting scientist” would claim the world is warming. Yet Hansen persisted, and persists to this day! He is currently an American adjunct professor directing the Program on Climate Science, Awareness and Solutions of the Earth Institute at Columbia University, as well as a climate change activist (he has even been arrested for his protests on more than one occasion!).

Where is the evidence?

Professor Ed Hawkins has demonstrated the rise in temperature across the globe over the span over the past two centuries; the eye-catching coloured graphs make for easy and quick understanding: the climate is changing and the globe is warming. His work has covered the global rise, not just the local UK rise. Using the hashtag #ShowYourStripes Professor Hawkins is spreading the visibility of climate change. It is helpful to see a change laid out like this; talk of the Earth warming by 1 degree Celsius does not sound catastrophic until put into a visual context.

But if you want more evidence, you may have it! The Intergovernmental Panel on Climate Change (IPCC) concluded that recent climate change was due to human activity, NASA have long been documenting the tangible reality that the climate is changing and it is due to human activity and if you want to remove human bias from the equation: computer simulations of human activity on the climate also concur that humans are changing the climate. This however is just the tip of the ever-shrinking iceberg of climate change research that has consensus in the 95th percentile.

If this is the case, why are so many people still in denial about climate change?

This is a complex interweaving of sociology, psychology and political science but we can sum it up in the famous duo of money and power.

The most obvious example of this by country is The United States of America who currently are ranked 3rd in the world of sampled countries for rates of climate change denial.

But why? Well, initially climate change was laughed out of the room by much of the scientific community. Now that the vast majority of scientists are on board you would think that this would settle the debate, but not so. In recent years especially, there has been a rise in anti-establishment and anti-intellectual group think. The election of current US President Trump, for example, has been highlighted as the culmination of this movement – the establishment experts are seen as corrupt and untrustworthy. Unfortunately, climate scientists, and the scientific community at large, have fallen into the “establishment” category. Many people blame corrupt systems for their economic dis-empowerment but sadly climate scientists also bare the brunt of this by association.

The climate change movement and its participants have been victim to a strategic smear campaign. In our very recent history, climate activists were seen as unclean hippies, all vegan, wearers of Birkenstocks and smokers of the devil’s herb. As caricature-ish (and funny) as this sounds, this campaign has been very successful and continues to be in many circles. The best way to discredit a movement and take away its power is to make fun of it.

But who or what would concoct this image of environmentalists and climate change scientists and why? Money and power. So much of the world’s wealth is tied up with the fossil fuel industry which contributes the largest portion of greenhouse gasses to our atmosphere.

The top rung of people in charge of this industry stand to lose much of their net-worth if the fossil fuel industry was held to the standard it needs to be. And if polluting the planet, changing the climate and then pretending it isn’t happening sounds like an extremely short-sighted way to secure personal fortune, then you would be right. And that’s why people like Greta Thunberg are out in force to demand drastic change to the way our very societies function to save the whole planet.

So, climate change is a very real problem but how exactly does it occur? Our next article in this series will outline how climate change actually works and what our future may look like (hint, hint, it’s Venus). 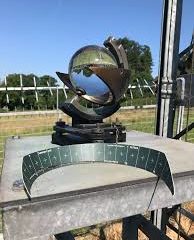 WETTEST OCTOBER FOR 11 YEARS, MUCH WARMER THAN AVERAGE, ABOUT AVERAGE SUNSHINE