Around the world in Eight Moon Myths

We all know of some myths surrounding our only natural satellite. We’ve gazed at it for thousands of years, and it has inspired some great and unusual stories over time. We are quick to say that a full moon causes insanity or madness (doctors and nurses in A&E seem to lead this one) and at Halloween we watch out for any werewolves that might be prowling under the light of the moon, changed from their usual human form into something wild and uncontrollable. But did you know that various cultures around the world have their own, unique legends about the moon?

Chang’e and the moon rabbit

Chang’e, namesake of China’s recent moon missions, is a woman in Chinese myth. It is said that she was once a normal woman, married to her husband, the archer Hou Yi. Hou Yi shot down the suns in the sky to stop the world burning (he left us one to keep us warm) and as a reward was granted the elixir of immortality. He then gave it to Chang’e to look after, as he didn’t want to be immortal without his beloved wife. However, someone tried to steal the elixir from Chang’e while Hou Yi was out hunting, and to prevent anyone else getting hold of it, she drank it. This made her immortal but left her husband fated to die, and, mourning, Chang’e flew to the moon, hoping to be close to him. That, or she just stole the elixir from Hou Yi. Tales vary. She remains on the moon, but not alone. She has a small companion with her. This is the moon rabbit, which you can see on the surface of the moon (similar to our man in the moon). It is said that the rabbit works endlessly at a mortar and pestle, but what they are mixing varies from culture to culture. While Chang’e herself is a primarily Chinese myth, the moon rabbit or Jade rabbit features in various East Asian cultures, including Japanese and Korean folklore.

In Aztec culture, they have a Moon God, called Tecciztecatl (really glad I don’t have to pronounce that in public). He is associated with Asian moon myths as well, though, and he is even believed to represent the man in the moon that we know of today. Tecciztecatl lived in a universe where various sun gods ruled in succession. In the past they had four sun gods, each having died in a different way, by wind storms, fiery rain, floods and even jaguars. The flood one is fun; when the flood spread across the world all the people turned into fish to escape death. The sun, apparently, couldn’t. Anyway, once the fourth moon god had perished, the gods set up a bonfire and asked for volunteers to become the new sun. The lucky winner would be sacrificed and become the new god. There were two volunteers (surprisingly, given the whole sacrifice part) – Nanahuatzin and Tecciztecatl. Nanahuatzin was the first to jump into the fire after Tecciztecatl hesitated. Seeing Nanahuatzin throw himself into the fire, though, steeled Tecciztecatl’s courage and he jumped in straight after. So, they ended up with two suns in the sky. The gods were furious, and threw a rabbit at Tecciztecatl. (Somehow) this dimmed the second sun’s brightness so it could only be seen at night, and left an imprint of the rabbit (like in East Asian culture) on the surface of what was now the moon.

In Alaska, Northern Canada and Greenland, the Inuit people have their own myth about the moon and why it rises and sets every night. Like lots of Greek legends, this myth features horrible people and just a smidge of incest, as Anningan (or Igaluk depending on the region) the Moon God wishes to capture his sister, Malina the Sun Goddess, to be his lover. He has failed, but is still chasing her, through the sky every night as the moon follows the sun’s path. As he chases the sun through the sky, Annigan gradually gets thinner and thinner, as seen in the waning of the moon. The new moon, it is said, is when he leaves to go hunting. Got to keep up that energy for creepy sister stalking.

Ixchel is one of a number of Mayan Moon Goddesses, herself associated also with Fertility. She was an old woman, who carried a jug of water around with her. Every so often, she would overturn the jug and send powerful floods and rainstorms to Earth. She is sometimes known as the Grandmother of the moon (and potentially mother of the moon rabbit) and is a goddess of weavers and women in childbirth. These aren’t her only accolades though, as she is also thought to represent the waning of fertility in old age, just like the waning of the moon. And she was a doctor, too. However, as she is known as the Grandmother of the moon, some believe her to be only one of a number of goddesses, each representing both a stage in a woman’s life, and a phase of the moon. Other moon goddesses include Po, the goddess of menstruation and procreation, fertility and growth, and even disease and water.

Soma is another Moon God associated with Fertility and medicine, sometimes represented as an embryo, and other times shown to be a bull. Hindu texts say that Soma guards the nectar of immortality, which is only allowed to be consumed by the Gods themselves. Soma rides across the sky in a chariot pulled by white horses and all hares are incarnations of Soma himself (there is some overlap between myths of different cultures, as you can see!) When the Gods drink some of the elixir of immortality stored on the moon, they drink away some of the moon’s life force, causing the moon to shrink, or wane. The Indian moon missions are also named for Soma, in his other guise as Chandra; the Indian lunar orbiters are called Chandrayana, or moon vehicle.

Another story shows the moon and sun again as beloved companions; this time as husband and wife in an African myth from Benin and Ghana. In this legend, Mawu is the Moon Goddess, the almighty God, and Liza is the Sun God, and they are eternally linked in unity with each other. Mawu is the Goddess of night, joy and motherhood, and Liza is the god of day, heat and strength. Lunar and Solar eclipses feature in this myth, being known as the times the couple join to make love. Mawu has a starring role in this mythology, being the one to have created the world and all life on it, with the help of Liza, and their son, Gu the Smith God. However, once the Earth was created, Mawu was worried that it had become too heavy, so she tasked the Primeval Serpent, Aido Hwedo, with propping up the Earth by curling up underneath it and holding it up in the sky. She also gave a task to Awe, a monkey that she had created (like everything else living). She asked him to help her make more animals out of clay, that she could in turn give life to. However, the monkey became smug and boasted to the other animals that he could himself create life. Gbadu, the first woman that Mawu had created, instructed her daughter to go out and teach the people that only Mawu could give the breath of life, known as Sekpoli. The monkey attempted to prove Mawu and Gbadu wrong, but failed. Instead he received a powl of porridge from Mawu, containing the seed of death, to show him that only she had the power to give life, and that she could take it away just as easily.

Rona is a young girl in a story told by the Maori tribe from New Zealand. She was out one night to fetch water holding a calabash, but stumbled over tree roots and hurt her feet, annoyed, she begins to curse the moon, which should have been lighting her way, but was behind some clouds. However, unluckily for Rona, the moon goddess heard this abuse, and snatched up the young girl, taking her up into the sky. Before she went too far, though, Rona managed to grab onto a branch from a ngaio-tree. She held on so hard that the whole tree came away from the earth and went with her. Now, you can see not a man in the moon, but a woman, alongside that Ngaio tree and her calabash. This is a stark warning not to curse any deities, even when you’re really tempted!

The Mamaiurans are an Amazonian tribe from Brazil, and according to their stories, there was once a time where there were so many birds in the sky that the people below could see no light from the sun, blocked as it was by the birds’ wings. This meant that there was no daytime, and the people were constantly worried about attacks from wild animals taking advantage of the perpetual night. Fed up with always being in the dark, two brothers, Iae andd Kuat decided to do something about this. They would go to Urubutsin, King of the Birds and beg him to share the daylight with the people of the tribe. The brothers hid inside a dead animal until the bird king came near, and as soon as he was close enough, Kuat grabbed the leg of Urubutsin and refused to let him go. This way, Urubutsin was forced to make a deal with the brothers, and they agreed that from then on, day and night would alternate, and that even during the night, the people of the tribe would have the moon to see by. From then on, Kuat represented the sun, and Iae represented the moon.

When the first astronauts came back from the Moon more than half a century ago, they brought back a scientific treasure trove of soil and rock samples. These were – and still are – intensely Read more…

Mysteries of the moon 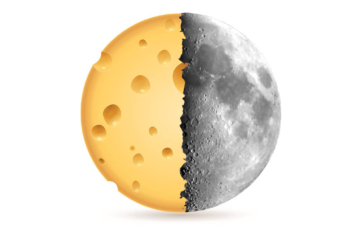