Ask any number of astronomers who they believe to be the most influential figures in 20th century astronomy and chances are you will hear the name of Vera Rubin being uttered a few times.

Recipient of numerous awards and accolades including the Royal Astronomical Society’s Gold Medal, Vera Rubin (nee Cooper; 1928 – 2016) can justly be called a pioneer of modern-day astronomy. Her work with Kent Ford, an accomplished instrument maker, in the 1960s and 1970s provided the first hard evidence for the existence of a new form of matter, one that does not emit or reflect light and can only be detected through its effect on ordinary matter. That work inaugurated an entire new field in astronomy, the study of so-called “dark” matter. To this date, astronomers still do not know what dark matter is, but it is estimated to be about 60 times more abundant in the universe than “ordinary” matter. Rubin’s legacy was described by The New York Times as “ushering in a Copernican-scale change” in cosmological theory.

The timing of Rubin and Ford’s discovery was not accidental, as electronic imaging devices were slowly making their way into research-grade astronomy at the time. The device used in their investigation was a so-called Carnegie image tube, one of the first electronic light detectors suitable for astronomical use. Although crude by today’s standards, these offered superior sensitivity to the photoemulsion technique that had been the mainstay since the 19th century. The Rubin-Ford team broke new ground again in 1984 when they attached a charged coupled device (CCD for short) to the 5-m telescope at Palomar observatory in California, marking the first time a CCD was used in such a way to obtain astronomical data. 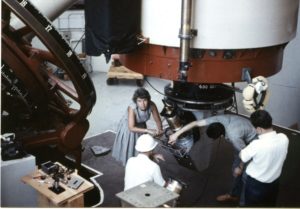 Vera Rubin and Kent Ford (white hat) check on their equipment at Lowell Observatory in 1965 during one of their first observing runs together. Credit: Carnegie Institution, Department of Terrestrial Magnetism

Rubin spent her life advocating for women in science and was known for her mentorship of aspiring female astronomers. Just as her contemporary across the Pond, Jocelyn Bell-Burnell, Rubin encountered discouraging sexism throughout her career. On one occasion, she was refused access to telescopes in an observatory with the excuse that the toilet was only for men! In true Vera Rubin style, Vera fashioned a little skirt image out of paper and stuck it on the toilet door.. In another episode, a supervisor told her he would deliver her master’s research to the December meeting of the American Astronomical Society in his name, because she was expecting her first child in November. Fortunately, her parents drove Rubin and her newborn nearly 500 kilometres to the meeting, through snowstorms, and then babysat so she could deliver the talk herself.

Vera Rubin passed away on Christmas Day 2016. Two weeks before her death, the Division of Dynamical Astronomy (or DDA) of the American Astronomical Society announced the creation of a new Prize named in her honour. The Vera Rubin Early Career Prize is now awarded annually to recognise “..an early career dynamicist, who demonstrates excellence in scientific research in Dynamical Astronomy or closely related fields, which has had impact and influence on these fields, and shows a promise of continued excellence as demonstrated by past practice in research, teaching, and the advancement and support of the field of Dynamical Astronomy”.

The author of this article is privileged to be serving in the committee of astronomers that judge Rubin Prize nominations. Nominees are ranked according to not only the significance of their scientific work, but also their wider impact on the field of service as well as their qualities as mentor and role model for young scientists. The roster of Rubin prize candidates could be regarded as the “Top Gun” of dynamical astronomy worldwide, the best of the best. With only one prize to award each year, the selection committee has their work cut out for them.

In late 2019, the American Astronomical Society announced that the Large Synoptic Survey Telescope ( or “LSST” for short) is to be named after Vera C. Rubin to honour Rubin and her colleagues’ legacy to probe the nature of dark matter by mapping and cataloging billions of galaxies through space and time. When completed in 2023, the newly-minted Rubin observatory will carry out the most comprehensive survey of the universe to-date. Images will be recorded by the largest digital camera ever constructed, featuring a massive 3.2-billion-pixel digital camera. Combined with a 8.4-meter primary mirror, it will allow it to photograph the entire available sky every few nights down to stars ten million times fainter than can be seen with the naked eye. Many groundbreaking discoveries are  eagerly expected from the Rubin survey; these will be a fitting tribute to Vera Rubin and her indefatigable drive to push beyond the boundaries of our knowledge about the cosmos.

Categories: Other GalaxiesastronomersTelescopes and Observatories