NASA Find Wide-Spread Water on the Surface of the Moon!

The presence of water on the Moon has long been suspected, although not in liquid or vapour form but as ice hiding deep in permanently shadowed craters found in the polar regions of the Moon. The NASA LCROSS and LRO space mission already confirmed the presence of water frost in the southern pole, but yesterdays’ NASA announcement went a step further, one that could be very relevant for the future of human exploration of the Moon and beyond.

Indeed, using observations from the NASA airborne SOFIA telescope we now know that water is present also on the sunlit surface of the Moon [1]. This was possible because by flying above the clouds SOFIA can look further in the infrared light compared to ground-based telescope, allowing detect the unique signature of light emitted by Hydrogen on lunar surface when two such atoms are bound to Oxygen to form water.

This finding is very relevant for NASA future Moon mission, Artemis, which aims not only at sending the first woman and the next man to the Moon by 2024 but also to progressively establish a permanent human presence and use the Moon as jumping spot for future missions to Mars, taking advantage of the much weaker gravity of the Moon. Having water on the Moon is indeed key to the Artemis program as it saves us from bringing drinking water all the way from Earth allowing instead to carry other useful equipment. Furthermore, water can be broken up to release Oxygen for breathing and to produce both liquid Oxygen and Hydrogen for rocket fuels.

So far, the Artemis program was planning to establish lunar bases on the Moon southern pole near those permanently shadowed craters where water ice can survive. But these regions present also some of the harshest conditions for humans to operate, which is why the SOFIA’s finding of widespread water on the Lunar surface of the Moon could potentially make it much easier to sustain a human presence on the Moon.

Potentially, because the discovery of water in the sunlit areas of the Moon prompts the question of how water can survive in these regions, which is also relevant to how practical it will be to extract water from the Lunar soil. Presently, NASA scientist best hypothesis is that water is trapped within small glass beads, the size of a pencil tip, that can protect the water molecules from the harsh lunar environment. These glass beads would form during microscopic meteor impacts where water is either carried by the small meteor itself or is synthesised during the impact, starting from other forms of Hydrogen and Oxygen molecules already present on the Moon. If such beads can preserve the water on the Moon surface, it may also make it harder to pull it out. In fact, digging for water in the sunlit regions may be even totally impracticable considering that the SOFIA observations indicate the presence of just 340 ml of water per cubic meter of lunar soil.

NASA has already lined up a series of robotic missions to the Moon, such as the VIPER Lunar Rover [2], which will help understanding how water is stored in the ground and in shaping the details of the Artemis program. Only time will tell how easy it will be to live on the Moon and jump to other planets from it, but certainly this was a very exciting development!

To conclude, it is important to point out that a pivotal role in this discovery was played by the Belfast-based company Andor Technology [3], who provided the very infrared-light detectors at the core of SOFIA instruments that spotted the presence of water on the sunlit regions of the Moon. Indeed, while this and other exciting science discoveries certainly help in creating an interest among  future generations in the economically key STEM (Science, Technology, Engineering & Mathematics) areas, the role of NI firms also shows how astronomy and space explorations can also feed back into our local economy in the short term.

[1] SOFIA found water near Clavius crater, which is one of the larger craters on the moon and the site of the fictional Clavius lunar base shown in the 1968 film “2001: A Space Odyssey”.

[2] Did you know? While the Russians never landed a man on the Moon, they were the first to send a remote-controlled rover on its surface. This was called Lunokhod 1 and landed in November 1970.

[3] Andor Technology also built the main detectors at the Inouye Solar Telescope, which became operational in January 2020 and produces the highest quality images of the Sun’s surface ever taken, allowing to see features as small as 30km in size. AOP is not only part of the UK consortium (which includes also Queen’s University Belfast) that made this possible, but also helped securing NI government funding that was crucial to the inception of the whole project.

Are you interested in space Astronomy information, then this blog is for you.

Topic : Impression of Planet Proxima Centauri with New the stars, Centauri a and Centauri B 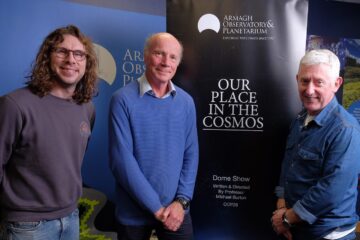