Halley meteor shower due to peak this week

Orionids are debris from comet Halley that graced Earth’s skies in 1986 and is expected to return to the vicinity of the Sun in 2061. Orionids tend to be quite fast, hitting the Earth’s atmosphere at 66 km /sec. This is fast enough to cross the Atlantic Ocean in about a minute! Peak activity is expected on the night of 21 October. Although the full moon in the SE will impede viewing of the shower, Orionids are intrinsically bright so some will likely be spotted above the eastern or northern horizon from about midnight. 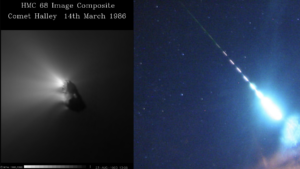 Left: The nucleus of comet Halley, imaged by the Giotto spacecraft in 1986. Right: A bright Orionid lights up the autumn sky.

Categories: Comets and AsteroidsMeteors and Meteorites

On 22 January 1997, Lottie Williams from Tulsa, Oklahoma, was walking through a park around 4am with friends when they saw what looked like a shooting star in the sky. “It was just a big Read more…

The Geminid meteor shower: Tears of the Sun God

The month of December offers us the most intense meteor shower of the year. These are the Geminids, so-called because they appear to emanate from the constellation of Gemini the Twins. At the peak of Read more…