An international collaboration of ten partners, including Armagh Observatory and Planetarium, has developed an innovative new telescope, made up of two identical arrays on opposite sides of the planet, which will track down sources of gravitational waves such as merging Neutron Stars and Black Holes. 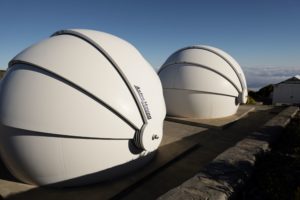 The Gravitational-wave Optical Transient Observer (GOTO) will help shepherd in a new era of gravitational wave science. With sites in the Canaries and Australia it will fully cover and map the skies for optical clues about the violent cosmic events that create ripples in the fabric of space itself.

GOTO began when the UK’s University of Warwick and Australia’s Monash University wanted to address the gap between gravitational wave detectors and electromagnetic signals. Now the international collaboration has ten partners, six of which are in the UK.

The project has received £3.2 million of funding from the Science and Technology Facilities Council (STFC) to deploy the full-scale facility. 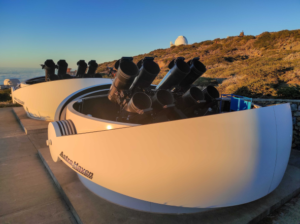 Dr Gavin Ramsay, who leads Armagh’s involvement in GOTO, says “It has taken many years to get to this point, so it’s a mixture of excitement and trepidation as we move into the next phase of the project. We’ve had a pandemic and a Volcanic eruption on La Palma, which has slowed us down, but we expect both sites to be ready when the next LIGO observations start early next year.

“We are very much looking forward to getting onto the site in Australia to build and commission the systems there. Being active partners in international projects such as GOTO is very much part of the heritage and fabric of Armagh which goes back to the 1950’s when the Armagh-Dunsink-Harvard telescope was built in South Africa.”

GOTO is designed to fill an observational gap by searching for optical signals in the electromagnetic spectrum that might indicate the source of the gravitational waves – quickly locating the source and using that information to direct a fleet of telescopes, satellites, and instruments at it.

The idea is that GOTO will act as sort of intermediary, which detect the presence of a gravitational wave event, and more targetable multi-wavelength observatories that can study the event’s optical source. 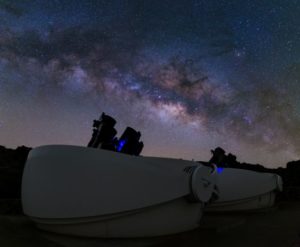 Professor Danny Steeghs of the University of Warwick, GOTO’s Principal Investigator, said: “There are fleets of telescopes all over the world available to look towards the skies when gravitational waves are detected, in order to find out more about the source. But as the gravitational wave detectors are not able to pinpoint where the ripples come from, these telescopes do not know where to look.”

“If the gravitational wave observatories are the ears, picking up the sounds of the events, and the telescopes are the eyes, ready to view the event in all the wavelengths, then GOTO is the bit in the middle, telling the eyes where to look.”

He continues, “The award of £3.2 million of STFC funding was critical in allowing us to build GOTO, as it was always envisaged to be arrays of wide-field optical telescopes in at least two sites so that these could patrol and search the optical sky regularly and rapidly. “This will allow GOTO to provide that much-needed link, to give the targets for bigger telescopes to point towards.”

To find out more about Armagh Observatory and Planetarium, go to: www.armagh.space