On 22 January 1997, Lottie Williams from Tulsa, Oklahoma, was walking through a park around 4am with friends when they saw what looked like a shooting star in the sky. “It was just a big ball of fire, shooting across the sky at just a fast speed,” Lottie recalls. After the sighting Lottie began her walk again.

A little while later, she felt a tap on her shoulder. When she turned around, there was no one there but something fell to the ground. It was a small piece of burned mesh. The object was blackened on the edges, and consisted of layers of a light metallic material. It was very thin and light, in fact was a little bigger than the palm of her hand. Lottie Williams holds a piece of a Delta II rocket that fell from the sky and hit her in the back while she was walking on a trail in Tulsa, Okla., in 1997. Brandi Stafford/Tulsa World

Williams was not injured by the impact as the debris was relatively light and probably traveling at a low velocity. It was also subject to wind currents, which mitigated the impact even further. AOP astronomer Apostolos Christou explains, “small pieces of debris like this one usually lose all of their orbital speed by the time they reach the lower parts of the atmosphere. They then free-fall the rest of the way, almost as if they were dropped from the top of a high-rise building.” 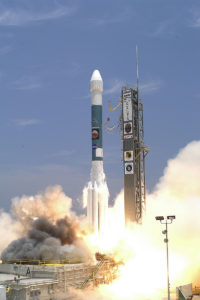 Delta II Rocket launching back in 2003

Although the fragment, which measured about 6 inches long, was never positively identified as having come from a rocket, NASA confirmed that the timing and location of the incident were consistent with the re-entry and breakup of a second-stage Delta rocket that fell to Earth after orbiting for several months. The main wreckage was recovered a couple of hundred miles away in Texas.

Williams says she was disappointed to learn that her fragment didn’t come from a star. “I was thinking I had something celestial. And here I got something man-made.”

What is Space debris/space junk? It is small natural micrometeoroids and the man-made orbital debris (MMOD) that orbit Earth and represent a risk to spacecraft. In 1979, NASA founded the Orbital Debris Program to adopt mitigation measures for space debris in earth orbit.

If you are worried, don’t have too many sleepless nights as scientists reckon the odds of being hit by a piece of falling space junk are around one in a trillion so you would have better odds of winning the lotto jackpot! Tulsa resident Lottie Williams was that unlucky one in a trillion!