Wonders of the April night sky

The April night sky is full of treats for the stargazer. In the 100th post of the Astronotes blog, Mary Bulman explains what you will be able to see.

This chart shows Virgo, Saturn and Leo together in the mid-April sky. (Credit: Armagh Planetarium)

Stargazing is an amazing hobby. While you may use a telescope or binoculars your basic requirement is nothing more than the naked eye, a clear, dark night and the heavens above. The night sky is like a living museum and you don’t even have to pay an entrance fee. Do, however, wrap up well as the nights are still very chilly.

If you are a newcomer to the world of astronomy this is a good month to start what I’m sure will be an exciting journey. April is  Global Astronomy Month (GAM). This, now annual event, is organized by Astronomers Without Borders, who were responsible for organising the very successful International Year of Astronomy 2009.

Lord of the rings: The beautiful planet Saturn as seen by the Cassini spacecraft (Image credit: NASA)

Venus, the dazzling Morning star has now left us, as has Jupiter, our Solar System’s largest planet. Joining us on the celestial stage in the eastern sky is Saturn, the second largest planet. The lord of the rings can be seen strutting its stuff in the second largest constellation, Virgo.   It can be seen above and to the right of Spica, the brightest star in Virgo. Saturn was at its closest to Earth on 4 April when it reached opposition, and, at magnitude 0.3, is at its brightest for three years. It is the sole planet on view this month, though Mercury can be seen at the beginning of the month as a faint star just after sunset. It is difficult to spot and a clear horizon is required.

The well-known and beautiful winter constellation of Orion is setting in the West earlier and earlier and by the end of the month will have left the night sky.  One of the best known star patterns in the Northern hemisphere, the Plough graces our sky the whole year round. It is not a full constellation but part of Ursa Major, the Great Bear which is the third largest of the 88 constellations.  In America the Plough is generally referred to as the Big Dipper, and some people call it the Saucepan. Right now it can guide us to a jewel of the spring sky.

The bowl and a portion of the handle stars of the Plough are visible in this photograph taken by astronaut Donald R. Pettit from the International Space Station (image credit: NASA)

Using the handle of the Plough, extend the arc which it forms down the sky until you come to a bright orangey yellow star. You are looking at Arcturus which heralds the arrival of spring in the northern hemisphere (and autumn in the southern).  It is the most southerly star in the constellation of Bootes the Herdsman. Its name is Greek, meaning “Bear Guardian” reflecting the fact that it is near the constellation of Ursa Major. It is the fourth brightest star in the sky after Sirius, Canopus and Alpha Centauri. It is a super-giant star and technically it is dying but a star on its last legs can still be around for millions of years, so no need to worry about a supernova explosion from Arcturus just yet.

Arcturus is a red giant over 25 times the diameter of our Sun. (Image credit: via wikimedia.org)

Arcturus sprang to fame when it was used to switch on the lights at the opening of the 1933 Chicago World’s Fair. The star was chosen as it was thought that light from Arcturus had started its journey at about the time of the previous Chicago World’s Fair in 1893.  As Arcturus is 36.7 light years (11.3 parsecs) from Earth the light visible in 1933 would have started its journey in 1896 not 1893 so the mathematics was a bit dodgy( I am not talking simple subtraction here, at the time astronomers thought Arcturus was 40 light years away) but the concept quite novel. What a way to make a link between two events! Light from the rays of the star was focused on photo-electric cells in a series of astronomical observatories and converted into electrical energy which was transmitted to Chicago where it automatically activated the fair’s lights.

Since ancient times peoples of all cultures have seen stories in the night sky some of which served a practical purpose. To the Boorung people of Victoria in Australia the appearance of Marpeankurrk (Arcturus) in the night sky signaled that the ant larvae were in season. The story goes that Marpeankurrk, an old woman, was in the bush looking for food for her starving people. As it had not rained for a long, long time the rivers and billabongs had all dried up. The usual bush tucker was nowhere to be seen. She lifted up logs but could find no lizards or snakes. Nor were there grass seeds or fruit to eat. After walking for many hours she saw a wood ant’s nest. So desperate was she that she went to it and opened it up with her digging stick. In the nest she saw thousands of larvae. She put one in her mouth and ate it. The larvae were delicious! She collected all that she could and hurried back to her people. The larvae of the wood ant saved the people. It soon became their favourite food. When Marpeankurrk died she went up into the sky and became a star. Every time Aboriginals of the Mallee (Murry River) Country see her they know it is time to look for their favourite food, the larvae of the wood ant, first found by this clever woman.

The Plough can guide us to another well known, special but quite dim star, the North Star (or Pole Star), officially called Polaris. To locate Polaris use the two stars on the blade of the Plough, Merak and Dubhe, known as ‘the Pointers’.  Now imagine drawing a line between these stars and extending it five times the distance between them across the sky from Dubhe. You will arrive at Polaris. The significance of Polaris is that it doesn’t move across the sky during the night like the other stars do. As the Earth rotates on its axis (every 24 hours) the stars and other heavenly bodies appear to move across the sky when in fact it is our own planet that is doing the moving. The reason Polaris doesn’t move is that it is almost directly over the North Pole. Its position in the sky is determined by where on the planet one is viewing it from.

A wonderful spring constellation represented by a lion can also be located using the Plough.  I am of course referring to Leo. Begin with the two stars that make up the side of the blade nearest the handle. These stars are called Phad (also known as Phecda) and Megrez. Follow the line they make downwards toward the south-western horizon and you will arrive at a bright star. This is Regulus, the brightest star in Leo, and the bottom star in a pattern that looks like a hook or backwards question mark. Using a little imagination you should be able to trace out the shape of a giant stellar lion sitting in the heavens.

Mark April 21-22 on your calendar and spend an hour or two scanning the sky for meteors caused by debris left behind by Comet Thatcher (not to be confused with the Iron Lady of British Politics, who, it is said, was so disappointed in the images of Comet Halley from the Giotto probe that she resolved to cut the UK’s contribution to ESA!), last seen in 1861( not November 1990!) and first observed in 687BC.  The best time to observe is after midnight, looking North East . The Lyrids are an old meteor shower, getting weaker by the year so is not the most spectacular but you may see 10 to 15 meteors an hour if the night is clear. Still worth a look I think.

It’s always disappointing when Orion, the most spectacular constellation in my opinion, disappears below the horizon.

[…] browse the night sky by pointing your phone to spaceHow to Explore the Night Sky Without a TelescopeArcturus, Regulus and Other April Night Sky Wonders // 0) { //0==expires on browser close var cdate = new Date(); […] 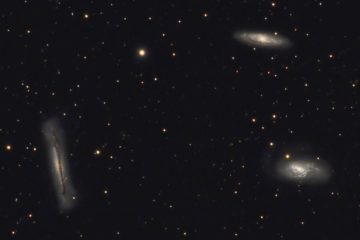