Walking Tour of Armagh for new AOP staff and students

The staff and students that work and study in the Armagh Observatory and Planetarium come from all over the world. Different cultures, backgrounds and even languages mix on College Hill and are welcomed by the City of Armagh. This week a group of the newest students and staff were able to attend a walking tour of Armagh by the brilliant Donna Fox.

“I liked the tour because I had seen lots of interesting buildings and sculptures as I’d been walking round Armagh before, and it was nice to get context on what they were all about” Laura Scott 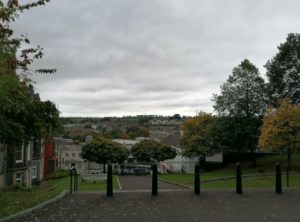 The crew were greeted by Donna outside the Planetarium building and she gave the group an introduction to the pre-history of Ardmacha, the height of Macha and the Royal School. As the group meandered down towards the mall we were told of its history as a racecourse, and the efforts of Archbishop Robinson to turn it into a public area. The history of the Courthouse, and the houses on the east of the mall was woven through the narrative as the group was shown the Cannon and the various art pieces that dot the Mall before being brought to the Gaol.

Donna fielded questions from the group with enthusiasm and encouraged everyone to keep their eyes open for the various gargoyles and angels doted around rooftops. As the group trotted up Russell Street and onto Scotch Street, we were shown the Market Place, and the Market Place Theater. As we entered the Church of Ireland grounds, we were told the history of the building, and the hill on which it stood. Donna took us on a tour of the gardens and as we left, she brought us to the Armagh Robinson Library, a close institutional friend to Armagh Observatory and Planetarium. 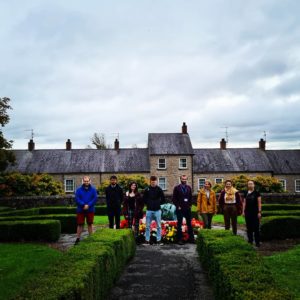 “It was fantastic to learn about the history and architecture of Armagh, especially some of the smaller details I would never have found out otherwise” Alice Humpage

Finally, we were brought down Abbey Street where we finished the tour at the Celestial Sphere, a very fitting destination for us! The art piece by Brian Connolly features engraved images of several objects from our collection such as the Gilkerson Orrery. Though all of us on the tour are not originally from Armagh, we’ve all come to love the city and the people we now call neighbors and friends.

“The tour was great – I loved the mix of both interesting and quirky stories of the history of Armagh. They’re more memorable than dates and statistics and they help you feel closer to a place” Colin Clarke 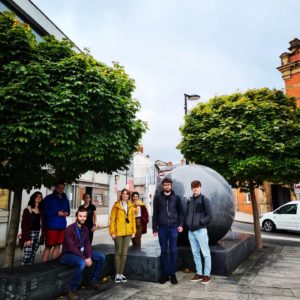 Solving a 40 year cosmic mystery about interstellar gas only to uncover an even deeper one. Author: Michael Burton, Director of the Armagh Observatory and Planetarium Hydrogen molecules have been found in clouds of shocked Read more…

Want to know more detail about the research described in this Astronotes article on ultra-hot hydrogen molecules? Here are five papers spanning more than four decades of research that helped lead to this discovery of ultra-hot molecular hydrogen: Read more…