Hello to all you stargazers!

As we are now heading into August, this is a great time for you all to look up (depending on weather conditions of course – as we do live in the UK)! We are drifting away from Summer slightly but August is still a great time to stargaze. It is especially great around 11pm, and remember to always give your eyes 20 minutes to adjust to the low-light conditions.  Toward the end of the month is a better time to stargaze due to the full moon we have present between the start-mid August, however there is still lots to see during this time, it’ll just be brighter than usual!

Starting with our stargazing, in the North sky we have the reoccurring Perseids meteor shower; the peak time to view this is during the middle of the month as this is when our planet moves through the densest part of the comet’s debris trail. The moon will be very bright during the middle of the month and will make things difficult to see so I would advise the first week of August when the sky will be at its darkest. The Perseids meteor shower gets its name from the constellation Perseus, which is where the meteors tend to be found in the sky. This celestial light show occurs when the Earth’s orbit takes the meteor through a lane of space debris which was left behind the comet Swift-Tuttle. As the debris that are left are the size of sand grains, they are burning into our atmosphere at 37 miles per second and therefore leaving the nice shooting streaks across our night sky. 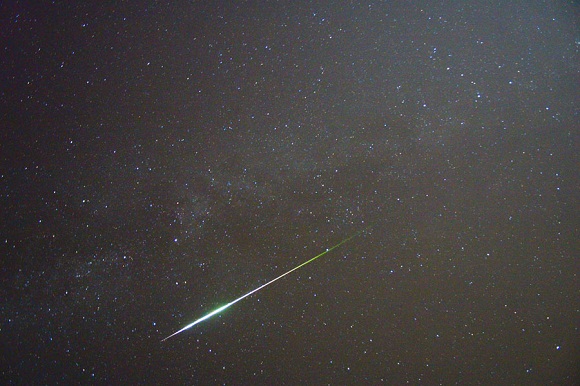 13 August 2009: A perseid flashes through the sky (Image credit: Andreas Möller via wikimedia.org)

What planets will we be able to see in August?

First off, we have Saturn! Saturn will be at its closest approach to Earth and it’s face will be fully illuminated by the Sun. It will be at it’s brightest and will be visible all night long. If you’re looking a picture of Saturn and it’s brightest moons, now’s your time! Also, if you are a keen stargazer with a telescope, you will be able to spot Saturn’s rings!

Our next planet you will be able to see is the all mighty Jupiter. Jupiter is the largest planet in our Solar System and has a whopping 79 moons! Jupiter won’t be showing off in our skies until the end of August, 29th August onwards. 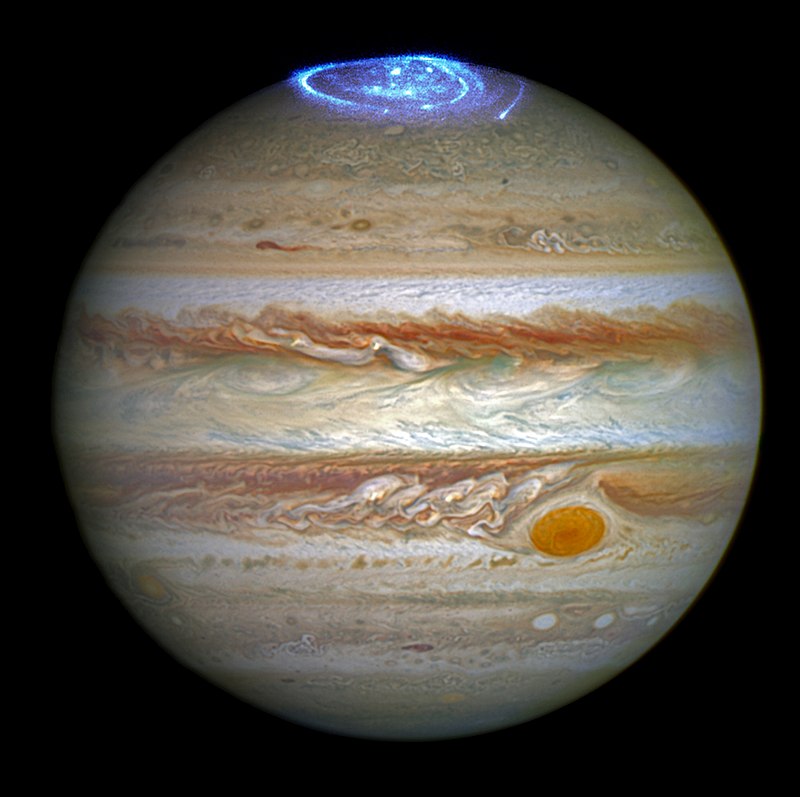 So now we have talked about the moon the planets we will be able to see what also the famous meteor shower, lets talk about constellations and specifically Hercules (not the movie) and Sagittarius. 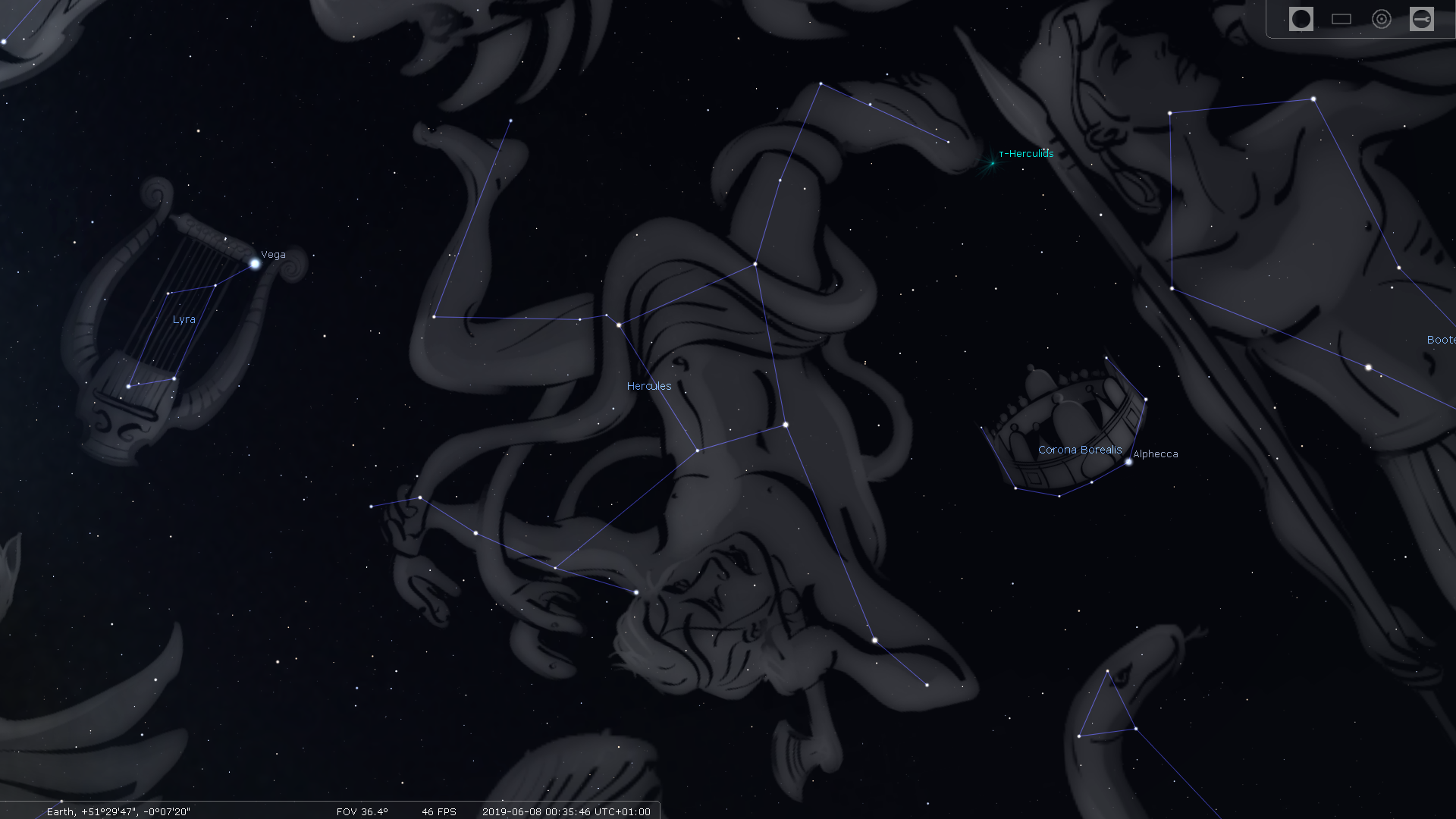 Hercules can be found East in the sky and he is named after the Greek hero in mythology. Most stars within Hercules are very faint so you would need an area with little light pollution and of course, clear skies. If you look for the easiest part of the constellation, the flower pot, the rest of the constellation looks like a squashed spider! Within Hercules contains one of the oldest objects in the Universe (around 10 billion years old to be more exact) , globular cluster M13, and with a low-power telescope you will see the fuzzy nebula.

: M13: Observed through binoculars this ‘fuzzy ball’ contains approximately 100 000 stars held together by their own gravity. Where open clusters contain mostly young stars and are more difficult to spot due to their loose structure, denser globular clusters like this one are composed primarily of different kinds of giant stars that are ‘in their old age’ and that have already completed their main sequence.
Credit: Copyright: Martin Pugh/NASA

Moving on to Sagittarius, this constellation is one of the signs of the zodiac. Sagittarius can be found low on the horizon facing south and the best way to spot this constellation is to look for the teapot. Sagittarius represents a centaur which is a half man, half horse holding a bow and arrow. Sagittarius is great to find as the bow and arrow points towards the centre of our galaxy, The Milky Way. The Milky Way can be spotted but only in an area with very little light pollution and a great camera! What is in the centre of our galaxy you ask? A blackhole!! You can read more about this here. 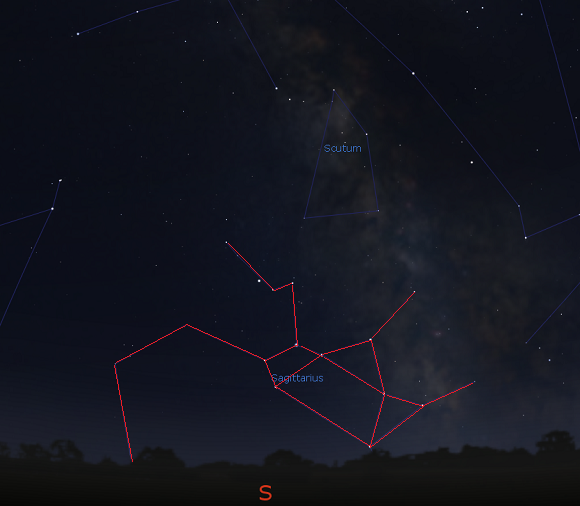 Looking South and trying to find the teapot shape, you will be able to find Sagittarius and then see the Milky Way running above it. (Image credit Stellarium)

So that’s about it for this month – please send us any cool astronomy pics via our social media channels!

Happy August stargazers! July was a fairly rainy and cloudy affair – this made stargazing and planet spotting difficult. Here’s hoping the August skies are clear and warm! August also brings with it slightly shorter Read more…