This comet’s peanut-shaped nucleus spans 9 miles (15km) in length and is 8 miles wide. It was named after Edmund Halley (1656-1742) although he did not actually  discover it. Halley asserted that a comet observed in 1682  and comets observed in 1607 and 1531 were not three separate celestial apparitions but were one and the same object, as he believed comets orbited the Sun just like the planets, a radical new idea back then. Just as he predicted, it did indeed return in 1759 but unfortunately Halley had passed away and didn’t get to see his prediction come true. It is predicted to grace our skies once again in 2061.

“They wonder at the star” (Imagine credit: via wikipedia.org)

Halley’s Comet takes 75 to 76 years to orbit the Sun, and as it comes closer to the Sun it will begin to glow as ice sublimate  off it forming a tail that can be millions of kilometres long. As Edmund Halley was able to predict the comet’s reappearance, scientists have been able to trace it back to observations as old as 240BC from China. Halley’s Comet even appears on the Bayeux tapestry which depicts the Norman invasion of Anglo Saxon England in 1066. As comets were thought to be a bad omen, one of King Harold’s attendants believed it was God’s wrath for King Harold wrongly claiming the throne and foretold of the battle ahead.

Meteor showers are best viewed from a dark location away from any artificial lights or city pollution that could obscure the viewing. The 4th of May brings a full moon so this may create some problems with observing the meteor shower; however the brightest of meteors will shine through the Moon’s glare.

Producing up to 60 meteors per hour, this shower is mostly visible in the Southern Hemisphere but can be seen in the Northern Hemisphere with a rate of 30 meteors per hour. The meteors are expected to radiate from the constellation of Aquarius but can appear anywhere in the sky throughout the peak time as the constellation of Aquarius won’t rise above the horizon until the early hours of the morning.

Mercury is at maximum elongation on the 7th of May which means it is at its furthest distance from the Sun; however this makes the perfect situation for viewing. Although it is the best time to look at Mercury, this planet proves difficult to observe for any astronomer. It can only be seen at dusk, right after the sunset due to its close proximity to the Sun and the Earth’s atmosphere can distort the image causing the surface of Mercury to look hazy. With the naked eye, Mercury can appear quite bright which means this month is a great time to look out for it as for the rest of the time, Mercury is usually too close to the Sun and gets washed out by its light, fading into the glare.

The surface of Mercury is very similar to the Moon’s, it is heavily cratered, mountainous and grey in colour, yet like the Earth and Venus (and unlike the Moon) it is full of dense minerals and metals. It can be spotted near the constellation of Auriga after the sun has set in the West. At around 10pm it can be seen close to the horizon and not far in the sky from Venus and Jupiter as they lie in Gemini and Cancer this month.

Jupiter, Venus and Mercury as they appeared on 7 May. (Image credit: Samantha Steed/Armagh Planetarium/Stellarium)

Whilst Mercury is moving further away from the Sun, Saturn moves into opposition with the Earth at the end of the month, on the 23rd and at its closest approach its perfect for viewing. A medium telescope will allow any individual to see Saturn’s rings and even some of its brightest moons and with the surface fully illuminated viewing or photographing Saturn will be possible. Saturn can be found in the South just below the constellation of Libra and as the night continues it will be visible into the early hours of the morning.

Saturn on the Scales on 23 May 2015 (image credit: Samantha Steed/Armagh Planetarium/Stellarium)

A constellation worth looking out for this month is Bootes the Herdsman, not only does it contain one of the brightest stars in the night’s sky but it also contains many galaxies. The easiest way to find Bootes the Herdsmen is to use the renowned pattern of the Plough. Once located follow the curve of the Plough’s handle and extend it out until you come to the bright star Arcturus. This is one of the brightest stars in the night’s sky and is named after the Greek word ‘Arktarus’ which means ‘Bear Guard’. As many myths tell of Bootes association with Ursa Major the Great Bear because of its close position in the sky. The seven stars of the Plough are also sometimes referred to as Oxen which neatly ties in with Bootes’ role as a herdsman.

There is also the story of the great hunt as every summer and autumn Bootes hunts the Great Bear. The hunt begins every spring with Ursa Major rising in the East and Bootes close behind. By autumn Bootes has caught up and injures Ursa Major with his bow and arrow causing Ursa Major to sink below the horizon and turn the autumn leaves red from his wounds. However Ursa Major is a powerful bear and it isn’t long before the wounds are healed and our Great Bear takes position high in the skies for spring.

Once Bootes is located, this constellation holds a treasure trove of celestial objects. With double stars and galaxies this constellation holds many objects visible with a telescope. NGC 5248 is often an overlooked galaxy in this constellation; however it is the brightest galaxy in Bootes. It is a spiral galaxy similar to our own Milky Way and has dark brown dust lanes leading to its bright centre. What many people enjoy looking at in this constellation are two closely positioned galaxies; IC 983 and IC 982. IC 983 appears much larger in size whilst IC 982 appears to be attached to the bottom right corner. These galaxies are shrouded in mystery and often referred to as ‘peculiar’ galaxies but to see them in the spring sky, a powerful telescope would be needed. Imaging can be difficult too with the light from Arcturus nearby.

So why not take a step further into deep space observing this month, try spotting a galaxy or a double star in Bootes the herdsman or look at the surface of our neighbouring planets. There is plenty to see with the promise of clear evenings and sparkling skies above.

(Editor’s note: Apologies to Samantha and our readers for the delayed publication of this article. This was caused by a technical issue with the Planetarium’s website which has now been resolved.) 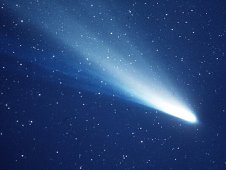