Article by Professor Michael Burton, Director of the Armagh Observatory and Planetarium

July 20 1969 saw, arguably, the most famous event in all of human history when Neil Armstrong stepped onto the surface of the Moon and left his footprints there – a mark still indelibly framed in the lunar dust today, some 49 years later.  It may seem almost as incredible that it is indeed nearly half a century ago that this epochal event occurred, one that united all of humanity for a short while, as we stared at that yellow orb in our night skies to know that one of our species was walking on it surface.

On the 20th of July 2019 there are sure to be reflections on this momentous event around the globe, to mark 50 years since Man first stepped onto the Moon.  As a lead-in towards this anniversary let us reflect on what we knew about the Moon before humans first arrived, what was right and what was wrong.

Image of the Moon captured by NASA’s Galileo spacecraft on a flyby en-route to Jupiter in 1992. Image Credit: NASA/JPL/USGS.

I will turn to no less an authority than Patrick Moore, who was the first Director of the Armagh Planetarium, responsible for overseeing its own building and fitting out with our first GOTO projector, leading to its opening on the 1st of May in 1968 – the 50th anniversary of which we celebrated in Armagh with style earlier this year.  Patrick Moore’s own scientific expertise was the study of the Moon, where he was a recognised authority, so his own reflections have a special poignancy. 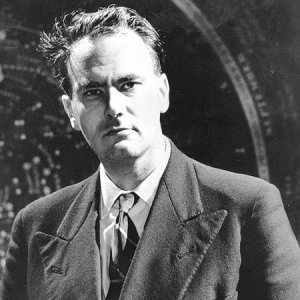 Moore wrote a book entitled “Guide to the Moon” in 1953 when he was 30, a comprehensive travel guide to the Moon, outlining what we (thought we) knew about our celestial neighbour, including a detailed description of the lunar surface, the great mountain ranges, canyons and craters that a traveller across its surface might encounter.  It would be an amazing journey to take, some canyons so deep and narrow that they rarely would have seen the Sun, some mountain ranges rising much higher than on the Earth from flat plains.

Written in his role as a Council member of both the British Astronomical Association and the British Interplanetary Society, as well as a member of the Irish Astronomical Society, the book is beautifully illustrated with the best black and white photographs of the day.  It also contains Moore’s own hand drawn map of the Moon marking features he describes to help travellers orientate themselves.

Patrick Moore’s map of the Moon in 1969, specially drawn for the Apollo missions. A copy of the original map hangs in the Armagh Planetarium. Credit Armagh Observatory and Planetarium.

Moore was under no doubt that humans would be visiting the Moon in the not-too-distant future!  His confidence  might have seemed unfounded, for remember this was 4 years before the space age had even begun with the launch of Sputnik – but Patrick Moore was never a man for self-doubt!

He was sure of the method of travel that would be used – multi-stage liquid fuel rockets (he called them “step” rockets), knowledgeable about Goddard’s and von Braun’s pioneering work in the USA and Germany, development spurred during World War II and the V2 rockets.  Though Moore was also prescient enough to know it would take special circumstances to make this happen quickly. He writes: “With united research carried out upon a peaceful Earth, we could probably reach the Moon within 20 years; with the situation as it is, it may take at least 50.”

Written with the memory of WWII still strong, this is not an unreasonable supposition to make.  But who then could have realised what the Cold War between the USA and the USSR and the ensuing space race would lead to?!  It would take a mere 16 years to get to the Moon!  However Moore was then sure that we would set up Moon bases and the exploration would be in earnest, not the light touch that Apollo engendered.  Nothing like this occurred, of course. But then Apollo consumed nearly 1% of the USA’s GDP at its peak, about 10 times what the US spends today on all its space programmes. 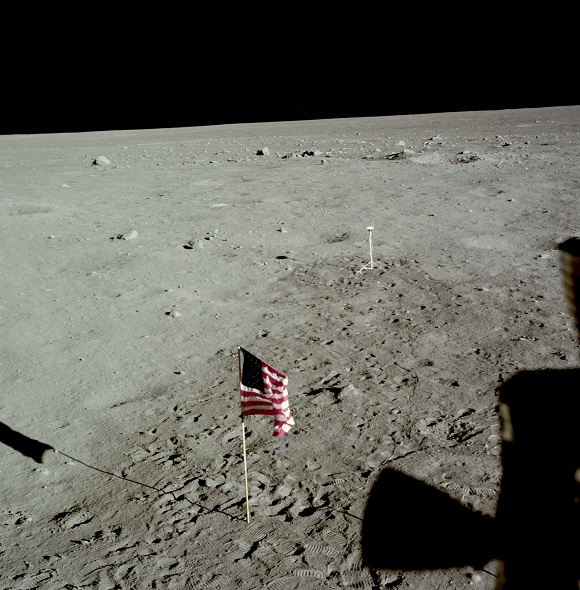 The flag planted by Apollo 11’s crew stay in place…until it was blown away by the blast from the departing Ascent Stage’s rocket motor (Image Credit: NASA)

While Moore’s description of the surface of the Moon  is vivid, and surprisingly accurate given it was all inferred through visual observations, many statements were wrong.  In part, this is caused by the difficulty of observation, for topography is only readily observed at lunar sunrise and sunset, when the mountains cast vast, rapidly changing shadows.  Observing the Moon full-on provides little contrast to discriminate features.  There is a lunar atmosphere, but an incredibly thin one.  Moore thought it might be about one ten thousandth the density of the Earth’s; in fact it is at least a billion times less dense.  So, while it seemed clear that no intelligent beings walked the Moon, Moore was pretty confident there was vegetation, perhaps similar to lichens causing the banding seen in several of the craters?  He was also sure that most of the craters and mountain ranges were the result of volcanism, rather than the asteroid impacts we now know dominate the surface appearance – a fossil record going back to the early days of our Solar System.

Moore knew the key to lunar exploration would be through lunar bases established on the surface.  We do now know that there is water on the Moon, locked within ice buried in craters at the Poles that never see the light of the Sun.  With this essential ingredient for life present, if still difficult to extract, there are prospects for supporting Moon bases.  As we approach the 50th anniversary of Neil Armstrong’s first steps on the Moon, there will undoubtedly be much discussion as to whether humanity should return to the Moon?  Or perhaps renewed interest in advanced robotic exploration, as now being pioneered across the surface of Mars?  Whatever the discussion, the Apollo Moon landings remain one of the epochal shared events of human history.

So, party season is over and we’re looking towards a long, cold January before the weather starts to heat up again. However, January is a great time to go stargazing as the nights are long Read more…

Did the young Earth have company?

Written by Apostolos Christou As far as astronomers know, the Earth is alone in its annual trek round the Sun – that is, apart from its natural satellite: the Moon. But our current understanding of Read more…