Searching for Intelligent Life Outside the Solar System

It wasn’t long after the invention of radio technology towards the end of the 19th century that scientists considered using the new medium to contact beings on other planets in the Solar System with Mars being the first target. However, with the early probes to Mars and Venus showing no evidence for advanced life forms, the attention shifted to the stars. In 1960 Frank Drake started Project Ozma using the Green Bank radio telescope in West Virginia to observe two nearby stars. Despite one false alarm caused by an aircraft, no signal was detected from either star. Since then a number of projects have been established to detect radio signals created by other life forms around planets orbiting other stars, with the SETI project perhaps being the most famous. 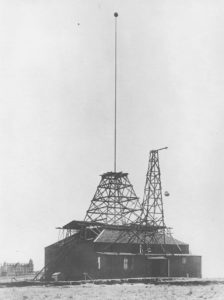 Nicolai Tesla’s experimental radio station outside of Colorado Springs
which was used to listen for signals from Mars.
Sourced from: WikiCommons

We now know that exoplanets are likely to orbit most stars. The closest star to the Sun is Proxima Centauri at 4.2 light years and has two known planets. Proxima Cen b is a planet slightly more massive than the Earth and orbits in the stars ‘Habitable Zone’. Although Proxima Centauri shows many flares, which could disrupt any atmosphere the planet has, it is still uncertain whether this planet is able to host life.

Now a group of astronomers led by Shane Smith reported observations made using the Parkes ‘Murriyang’ radio telescope in Australia as part of the Breakthrough Listen SETI project. They initially identified a signal which appeared to be from Proxima Centauri which was not due to an astronomical event nor obviously due to Earth satellites or other terrestrial sources. The signal was in a very narrow band and appeared to very slight drift in frequency and was seen over several hours of observations. 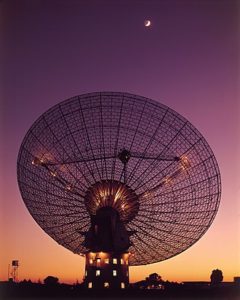 Parkes Radio Telescope ‘‘Murriyang’ where the observations were made.
Corrie Barklimore from Forbes, Australia

A detection of a radio signal from an exoplanet due to intelligent life would obviously create an unprecedented news event with world wide implications for humankinds place in the universe. In a paper from the same team led by Sofia Sheikh they explored whether the signal could have been caused by instrumental or other effects. After a detailed and lengthly study they found strong evidence that the signal was related to interference which was not previously well known. Although this study did not find evidence of extra-terrestrial life, it demonstrates the difficulty of making such a detection and will enable future observations to identify spurious events. The yellow-green slanted trail is the signal of interest with the red
dashed line is the expected signal assuming a constant drift rate and
is intensionally offset from the yellow signal.
Source: Shane et al 2021