We have developed a new method to look for carbon compounds in space, akin to prospecting for oil on Earth.

Between the stars lie vast amounts of interstellar gas and dust, spread thinly throughout our Galaxy.  The dust can contain compounds of carbon.  When it does we call it carbonaceous interstellar dust.  This is an important reservoir for the organic material in space.  The continual cycle of material between the stars and the gas in the interstellar medium in our Galaxy leads to the delivery of organic molecules to newly forming planetary systems.

A special sub-class of organic molecules called prebiotic molecules are thought to play a major role in the formation of life on Earth. Such prebiotic molecules are likely preserved in carbonaceous interstellar dust that are gathered together in planetesimals, in an early stage of planetary formation. The chemical composition in such environments may determine the planet’s hospitality to the formation of life there. Therefore, it is important to understand the life cycle of carbonaceous interstellar dust to study this possibility further. 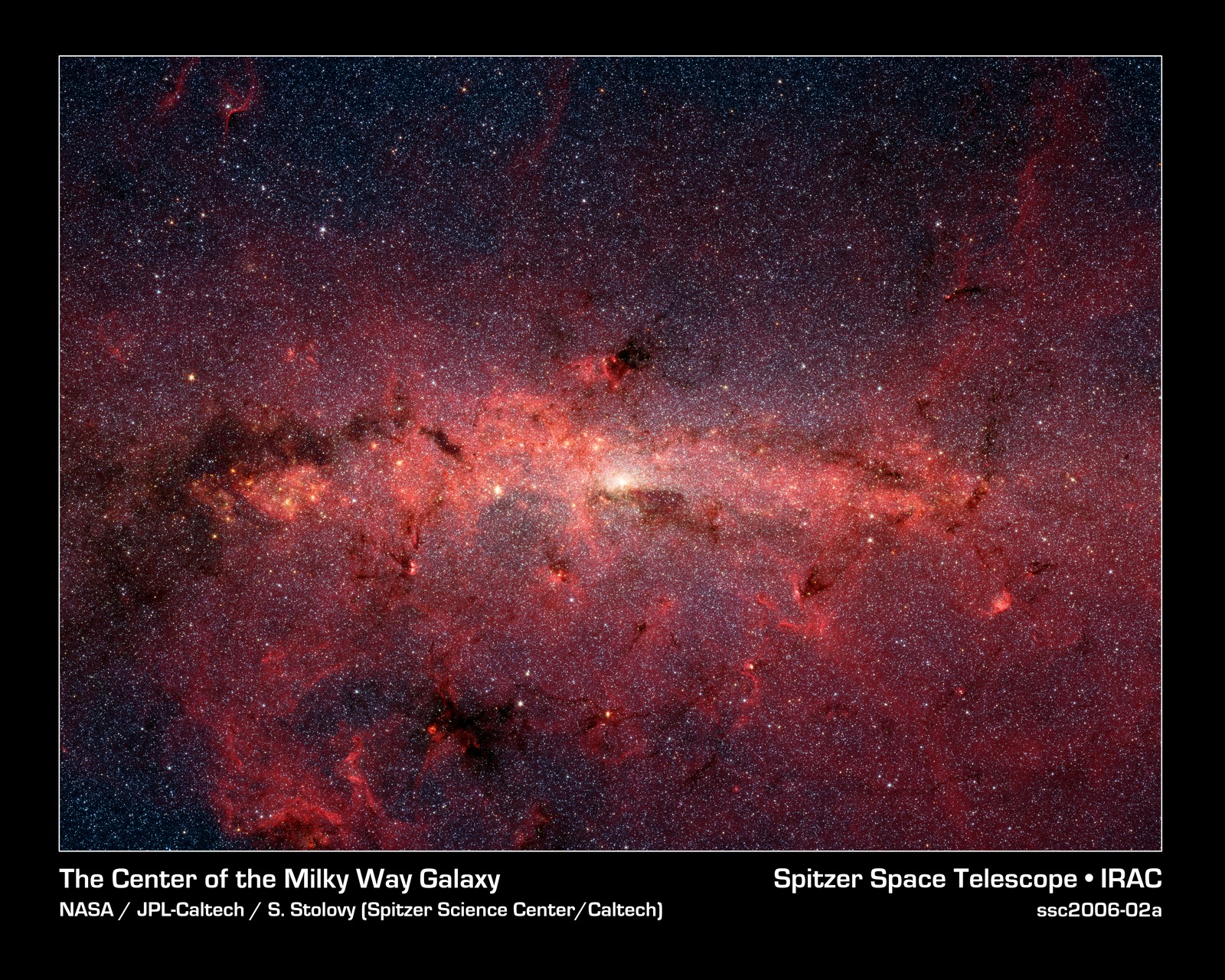 An infrared view of the centre of our Galaxy taken with the Spitzer space telescope. Thousands of stars that are hidden from us in visible light by the interstellar dust are seen here.  The very centre of the Galaxy is located in the white spot in the centre of this image where stars orbit around a 4 million solar mass black hole.  The dark clouds seen along the ridge running across the image represent the densest concentrations of dust and gas in our Galaxy. They contain vast amounts of organic molecules.  (Credit Susan Stolovy, NASA).

Hydrocarbon molecules – a subgroup of organic molecules – can be helpful to us for this purpose. Aliphatic and aromatic hydrocarbons – molecules containing chains and/or rings of carbon atoms – make up an important fraction of crude oil on Earth, which has been formed underneath the Earth’s crust from the residuals of the living organisms.

The aliphatic hydrocarbons present in some oil molecules are also essential for living organisms. They are of particular interest for studies of the interstellar medium as they produce significant features in the infrared region portion of the spectrum which astronomers can then measure with infrared telescopes.

Now, we have implemented a new observational method to map the amount of aliphatic hydrocarbon through the dusty sightlines to the centre of our Galaxy and then applied the method to another field in the Galactic disc. The resultant maps have revealed the distribution of the hydrocarbons through the interstellar medium. We found that at least 20% of cosmic carbon is hidden in the oily component of interstellar dust.  This makes it an important reservoir for organic material in the Galactic disk.

This method could be extended further with the James Webb Space Telescope in space where the features can be measured far better than from the ground, as well as expanded to include ice and silicate features in the dust in addition to the aliphatic hydrocarbons.  There is the potential to trace the cycle of organic material in interstellar space now that we are able to observe objects ranging from planet forming disks to distant galaxies.  Future applications of the method may enhance our understanding of the distribution of organic and prebiotic material in our galaxy and others.

This work is described further in a paper published in the Monthly Notices of the Royal Astronomical Society in June 2022. Entitled “Mapping the aliphatic hydrocarbon content of interstellar dust in the Galactic plane”, it is authored by Burcu Gunay and Melike Asfar (Ege University), Michael Burton (Armagh Observatory and Planetarium) and Tim Schmidt (University of New South Wales).  The paper can be accessed at at https://ui.adsabs.harvard.edu/abs/2022MNRAS.tmp.1531G/abstract.