Massive stars – what are they?

Published by Armagh Observatory and Planetarium on June 5, 2018

Article by Jorick Vink , Astronomer at the Armagh Observatory and Planetarium

When you are fortunate enough to have a clear view of the night sky, and you start wondering about the properties of all these sources of light, you might be amazed to find out all these stars have different colours, distances, and sizes.

Most stars in our Milky Way have masses like that of our nearest stars, the Sun, but there are also huge, massive beasts out there , some with masses as big as 300 times that of the Sun. These objects shine brilliantly, up to 10 million times more intensely than the Sun.

Stars more massive than 8 times the Sun are called “massive stars”, with lifetimes of just 2 million years, and thus much shorter than the 10 billion years of our Sun. Therefore, they are sometimes called the Rockstars of Astronomy, as they live fast and they die young!

Their ferocious nuclear burning, ultimately leads to an Iron core that collapses into a very compact object. For the most massive stars, about 25 times the mass of the Sun, the compact object that is left behind is a Black Hole. From such a super-heavy compact object, even light cannot escape. For those stars in between 8 and 25 times the mass of the Sun, the object becomes a neutron star. Both neutron stars and Black Holes have recently been detected by gravitational waves, proving the theory of relativity by Albert Einstein some 100 years ago.

Up until this year, astronomers believed that although most of the light is produced by massive stars, it was thought that most of the stellar mass was held together by lower mass stars like the Sun.

However, this paradigm has recently been overturned. Astronomers in Armagh in the massive star group lead by Prof Jorick Vink have studied the most massive stars known in our Local Universe, in the giant Starburst “Tarantula” region of the nearby galaxy the Large Magellanic Cloud (or LMC) (See figure). Taking into account the mass determinations from these most massive stars analysed in Armagh with more normal looking massive O-type stars studied by a large European Consortium, the VLT-FLames Tarantula Survey team, we found that the stellar mass function of stars is tilted in favour of the massive stars in the Universe (Schneider et al. 2018).

Where the life of massive stars is mentioned a picture of the Grand star forming region R136 in the Tarantula nebula.

This dramatic shift in our knowledge will have significant consequences for the numbers of Black Holes predicted to have formed in our Universe, and this will be tested in the next decade by thousands of detections of Black Holes with gravitational waves. Moreover, the light contribution of these most massive stars is expect to strongly dominate the light of the first Galaxies in our Cosmos, that are anticipated to be detected for the first time by NASA’s James Webb Space Telescope (JWST) and the European Extremely Large Telescope.

This will mean that this author and his team cannot relax, but instead the burning of calories will need to increase, just like the burning of the chemical elements in a massive star..! 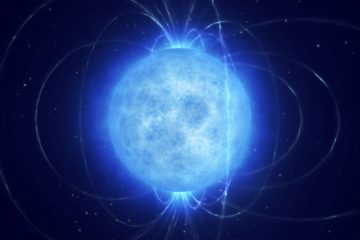 AOP Shaping the world of astrophysics for the next decade