COOL MARCH, SUNNIER AND DRIER THAN AVERAGE. EXCEPTIONAL HIGH PRESSURE ON THE 29TH

Armagh Observatory reports that March 2020 was cool, sunnier and drier than average. The highest pressure recorded during the late morning of the 29th March, namely 1050.0 mbar (corrected to mean sea level), equalled or nearly equalled that at 09:00 GMT on 9th January 1896, which was the previous highest pressure recorded at Armagh in a data series extending back more than 170 years.

There were 22 nights with ground frost (minimum grass temperature less than or equal to zero), of which the coldest was -8.7 C on the 29th followed by -8.1 C on the 20th. There were five nights with nighttime air frost (minimum air temperature less than or equal to zero). With a total of 128.8 hours of strong sunshine, March 2020 was much sunnier than average, approximately 17% more than the long-term (1881–2010) March average at Armagh and 31% more than the most recent (1981–2010) 30-year average. This was the sunniest March at Armagh for five years, that is, since March 2015. The sunniest day was the 22nd with 9.4 hours of strong sunshine, followed by 9.1 hours on the 19th.

It is interesting to note the daytime observation of a Pipistrelle bat in the Observatory grounds on the afternoon of the 18th. 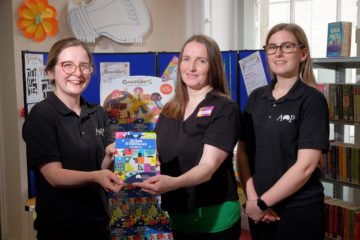 Armagh Observatory & Planetarium (AOP) has partnered with Libraries NI to distribute across the province 200 free copies of its brand-new children’s science book, “Big Book of Experiments and Bright Ideas.” Designed and written by Read more…