June night sky has plenty to offer – as long as you don’t wish for long, dark nights, that is; those are rather hard to come by in the month of the summer solstice! This means I’ll be talking mainly about things that don’t need a lot of darkness to be seen – but don’t worry, the constellations will get their chance to shine, too.

The most important astronomical event this month is undoubtedly the summer solstice. This year it falls on 21st June and will technically be reached at 10:13 BST – that is the time when the Earth’s north polar axis will be, if seen from above, pointing directly towards the Sun, making the day as long as it can be in the northern hemisphere, and as short as it can be in the southern hemisphere.

The motion of the Sun through the seasons was one of the first things people tracked in the sky, so by paying attention to what our nearest star is up to, we make a link between ourselves and our ancestors across millennia.

Stone Calendar in our Astropark, with the stones aligned to show the directions of sunset for the solstices and the equinoxes, in April 2021. Author: Rok Nežič

If you don’t live too far from Armagh, you could visit our Astropark on the 21st and see how the direction of sunset to the North-West, at 22:05 BST on that day, aligns with our modern Stone Calendar. If the weather isn’t the best on the 21st, a few days before or after will see it set in the same direction – we recently even cleared some shrubbery for a better view! The usual warning applies here: don’t look directly at the Sun, as you may damage your vision.

Sitting above 50 degrees of latitude north of the equator, the UK has rather long days in June: the solstice day lasts for 17 hours, 13 minutes and 20 seconds between sunrise and sunset in Armagh. Just over 800 miles (1300 km) north of us you reach the Arctic circle, within which the midnight sun can be enjoyed on the summer solstice.

But have you noticed that after sunset, the twilight is also quite long in the summer, when the transition between day and night is a lot sharper in the winter? That is because the Sun, at these latitudes, doesn’t dip very far below the horizon in the summer before rising again in the morning. In fact, astronomers talk about a few different types of twilight, and don’t consider the night to be a ‘true’ night at all unless the Sun dips more than 18 degrees below the horizon. By that measure, Northern Ireland sees no true night at all between early May and early August! In practice this means that – even in the middle of the night – you can see a little bit of a glow in the northern skies and so can’t see some of the faintest night sky objects. Thankfully there are still a lot of interesting things to observe despite all that! 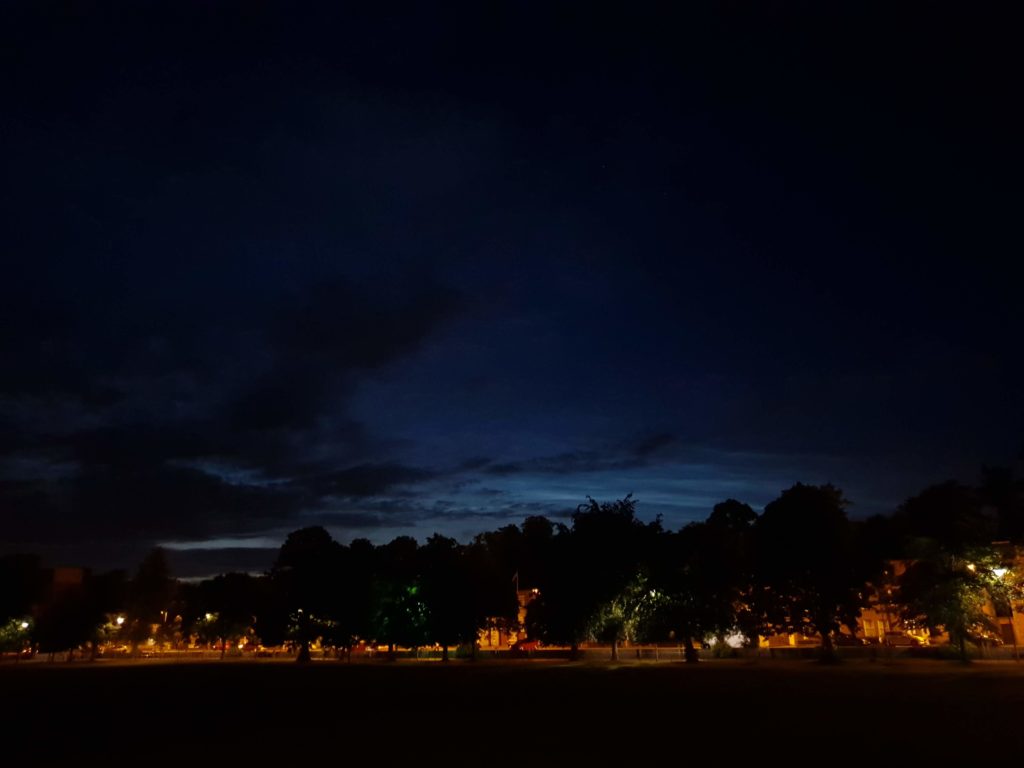 Not quite the midnight sun, but a glow in the northern sky seen from Armagh’s Mall at midnight on 21st June 2019. Some strange, glowing clouds seem to be in attendance, too… see below for more. Author: Rok Nežič

One of the consequences of this lack of ‘true’ night is that a strange phenomenon called ‘noctilucent’ (meaning ‘night shining’) clouds can be spotted sometimes: clouds, often along the northern horizon, that appear to shine with an eerie glow. These are the highest clouds in the atmosphere, consisting of crystals of ice, much like cirrus clouds a little lower in the atmosphere. Like cirrus clouds, they are also quite wispy. They appear to glow because the ice crystals catch and reflect sunlight. They are too faint to be seen in daylight, but the lack of true night at our latitudes puts them in the spotlight in the summer. 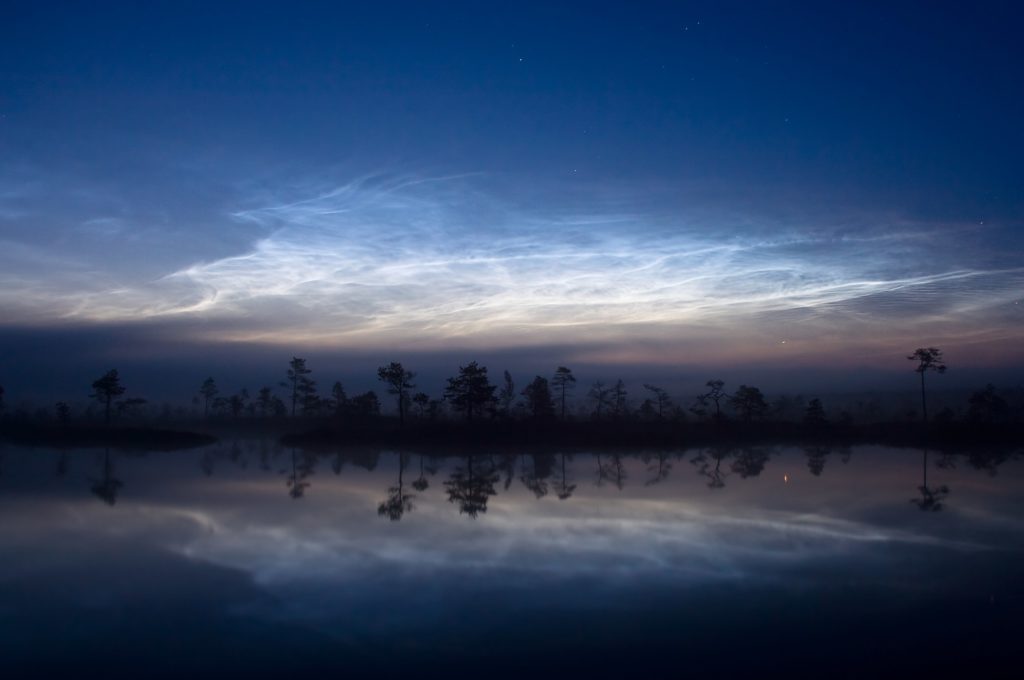 The likely first record of noctilucent clouds comes from none other than the 3rd Director of Armagh Observatory, Thomas Romney Robinson. On 1st May 1850, he noted ‘strange luminous clouds in NW, not auroral’ in his meteorological observations. This date falls just outside the traditional time period for observing noctilucent clouds in Armagh (the lack of ‘true’ night between early May and early August), yet such a sighting is still plausible.

Noctilucent clouds visible to the North through a gap in low-lying clouds above Armagh in July 2020. Author: Rok Nežič

Let us move on from luminous clouds to luminous orbs – both being lit by the Sun. The Moon will, as ever, feature prominently in the night sky in June. After the New Moon on 30th May, our closest celestial neighbour will reach First Quarter phase on 7th June, visible in the afternoon and early evening skies.

The Full Moon this month will fall on 14th June, a week before the solstice, when you will be able to see it all night. It is often known as the Strawberry Moon, although other names are sometimes used – such as, apparently, Hot Moon, as it heralds or accompanies the warmer days of summer. Hot Moon Summer, anyone? Hmmm… not sure about that one. 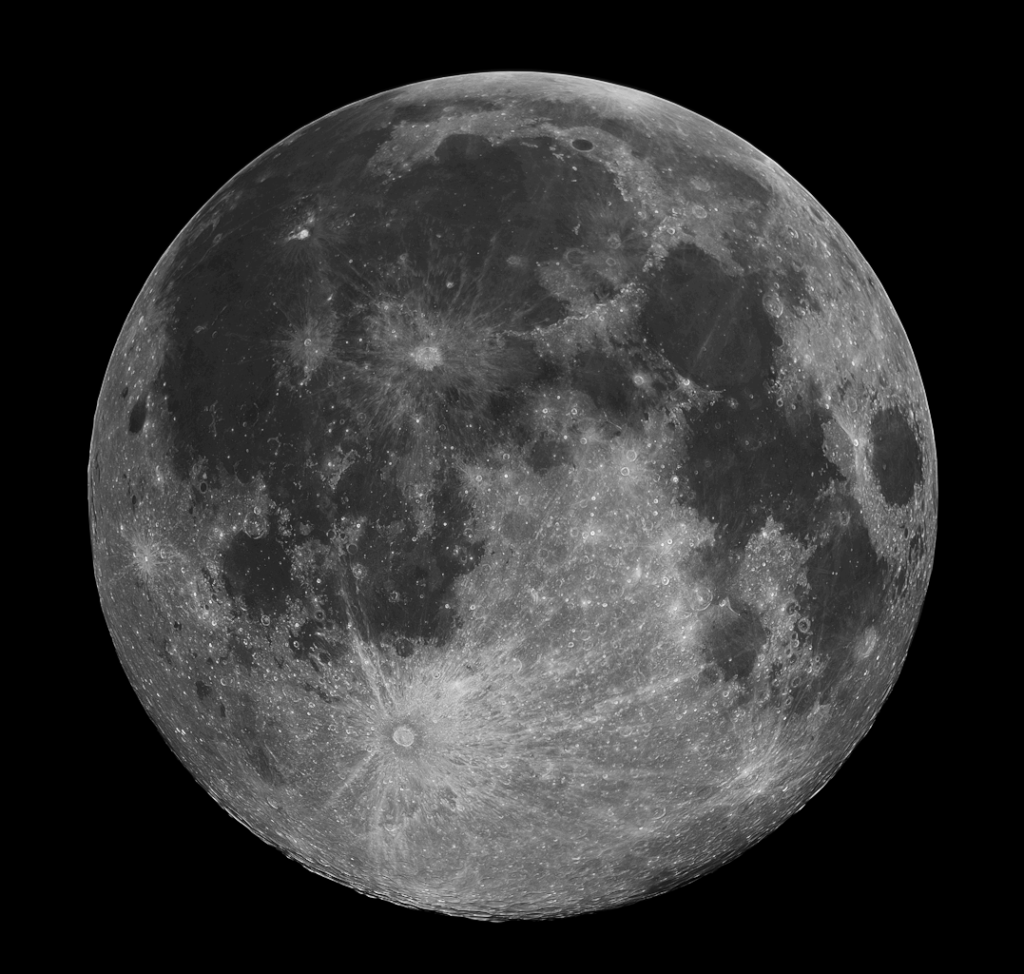 The Moon will reach its Third Quarter phase on the summer solstice, 21st June, when it will be best seen late at night or in the morning. June’s own New Moon will then occur on 29th June.

The planets Venus, Mars, Jupiter, and Saturn continue to put on a show at night. That is the good news. The bad news is that the show will continue to be visible only very, very late at night – or very, very early in the morning, depending on your perspective. They will be spreading apart over the course month and mostly moving away from the Sun.

The best time to see the planets will therefore be at the very end of the month, when it might even be possible to spot Mercury lining up with the rest just before sunrise. Saturn – the furthest away from the Sun in the sky – will be rising at 2am at the beginning of the month, and just after midnight at the end of the month. In the second half of the month the waning Moon will be passing near the planets, making for some interesting photo opportunities.

The planets spread across the eastern sky at 4am BST on 30th June 2022, an hour before sunrise. Credit: Stellarium/Rok Nežič

With the long days and the long twilight period, you should expect to only start seeing the brightest stars in the sky after 10pm – after 11pm close to the solstice – and a more proper nightscape only around midnight or so.

All June the southern skies will be dominated by Arcturus, the fourth brightest star in the night sky and the second brightest one – after Sirius – seen from our latitudes. It is a red giant star of a similar mass to the Sun, but much further along its path through life than our local star. At around 7 billion years of age (compared to 4.6 billion years for the Sun), it has stopped fusing hydrogen in its core and expanded its outer layers, making it appear cooler – and redder – than most stars in the sky. The reddish colour of Arcturus can be discerned with the naked eye. 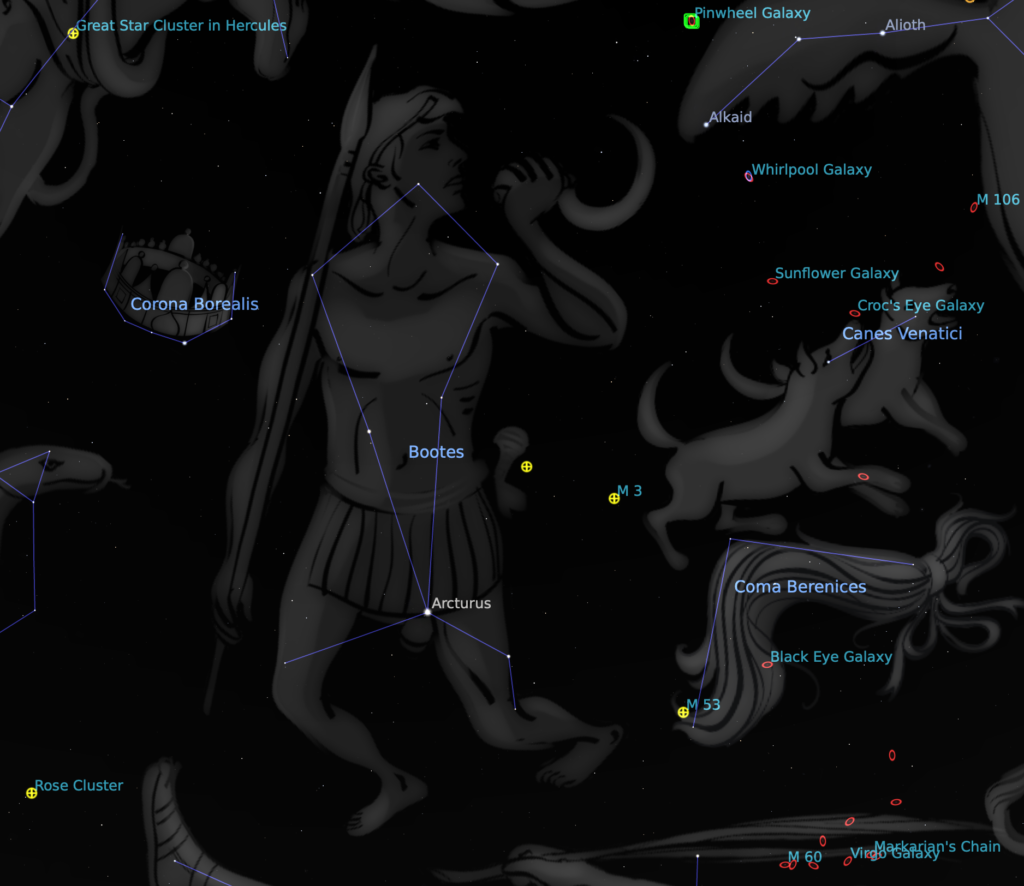 Boötes and the surrounding area of the sky, with the stars sized according to brightness, and the most prominent deep-sky objects marked. Credit: Stellarium/Rok Nežič

Arcturus sits near the bottom of the constellation of Boötes, which is sitting high in the southern sky all June. The strange name – pronounced ‘boh-OH-teez’ or ‘bo-OH-tiss’ – is Greek in origin and means ‘Herdsman’ or ‘ox-driver’. The region surrounding Boötes is quite interesting for deep-sky objects, because it is far away from the plane of our Milky Way galaxy. This means there are few gas and dust clouds in that direction, but plenty of globular clusters and distant galaxies.

Closer to the southern horizon the constellations of the zodiac continue their eternal dance. Gemini are already mostly set by the time darkness falls, only keeping the Twins’ heads – the bright stars Castor and Pollux – above the horizon in the first half of the month. The dim stars of Cancer will be setting after them, and Leo slowly following suit in the second half of the month. The bright blue star Spica in the constellation of Virgo will be keeping Arcturus company, staying right under it all month long. Meanwhile Libra, also quite dim, will be rising in the eastern sky, with Scorpius and Sagittarius peeking further above the horizon as the days pass. 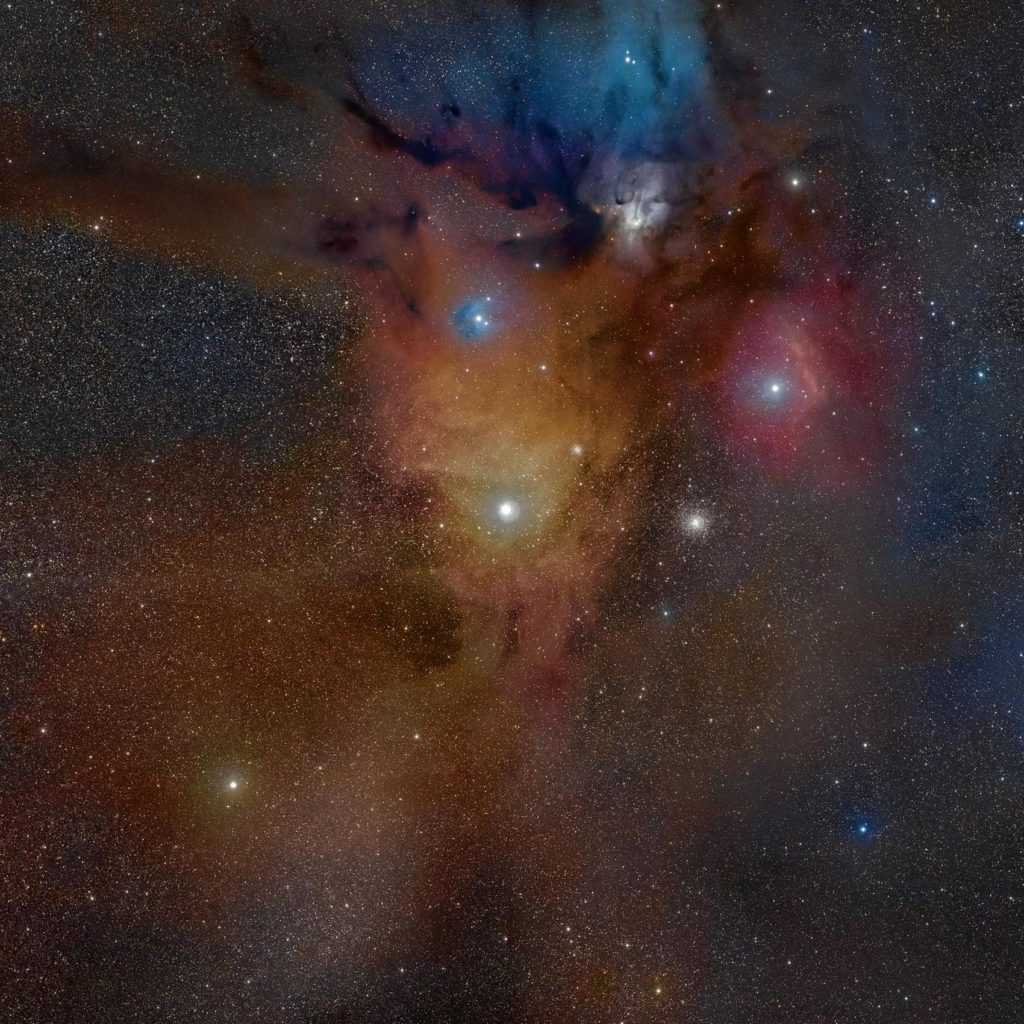 This deep-sky photograph centred on Antares – appearing as white rather than red due to over-exposure – shows a complex system of stars and interstellar clouds, known as the Rho Ophiuchi cloud complex. Author: Rogelio Bernal Andreo (CC BY-SA 3.0)

Moving slowly from south-eastern sky in the first half of the month to the southern sky in the second half, low above the horizon the whole time, you may be able to spot one of my favourite stars: the red Antares, the brightest star of Scorpius. It is a red super-giant, and in fact one of the largest stars you can see with the naked eye. Its name is, essentially, ‘anti-Ares’, so it sits in the sky as the opponent to the planet Mars, the god of war, referred here by its Ancient Greek name Ares. Antares also sits in a very complex region of space that is best seen in long-exposure photographs.

Welcome stargazers! This is an interesting time of year for those of us in the Northern hemisphere, because despite the shorter evenings, we have some more unusual celestial objects with which to satisfy our cosmic Read more…

Happy soon-to-be summer, star gazers! June has a few things going for it; it’s the beginning of summer (officially), we have a lovely new moon, there’s some planet spotting to be done in the early Read more…

Its June and school is nearly out. The summer holidays are fast approaching and whether you are planning a holiday home or abroad there will so many interesting objects to observe in the June Night Read more…