Yes, the JWST is now in space! You may be pinching yourself to be sure the images we are seeing from the James Webb Space Telescope are actually real – don’t worry, they are! After this 30 year long wait though, your disbelief is understandable. It took an enormous effort of human ingenuity and determination to get the Webb up there, but now that it is, what does this mean for astronomy moving forward?

Seeing that the happy dream appears to be ongoing with mankind receiving a steady flow of rich visual data fresh from Space, we are now able to relax somewhat and start to consider what it is we are already seeing and what the JWST hopes to find in Space. 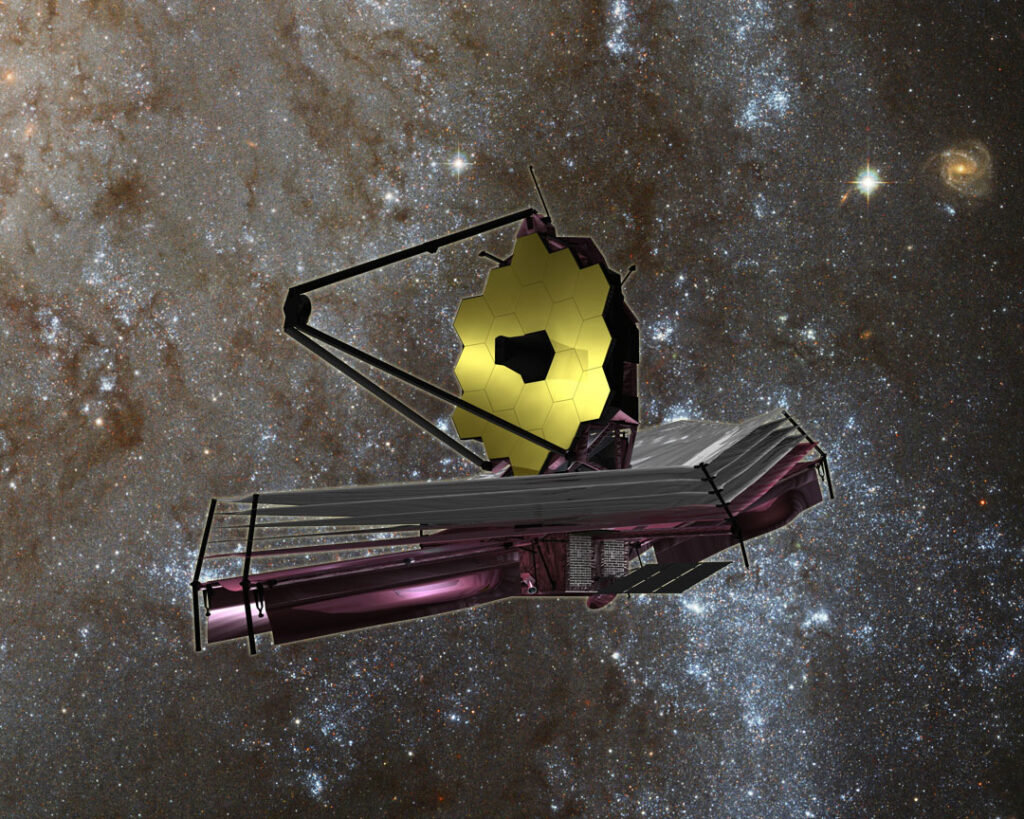 A good place to start is with a nickname given to JWST – the “First Light Machine”. It earns this title because it has the ability (thanks to it being a much bigger ‘eye’ in Space than the Hubble Space Telescope) to look beyond the Hubble Ultra Deep Field. But putting a 6.5-metre-diameter ‘eye’ in space in itself was a huge challenge. With no fairing (the cargo bay that stores the payload being taken to Space) of any launch rocket on Earth being big enough to fit the full JWST inside it, this enormous tennis-court-sized spacecraft had to be folded up in multiple directions a bit like an umbrella or a drop-leaf table. For the colossal engineering effort to be worthwhile however the multiple sections of the folded primary mirror had to then be able to realign with each other with incredible precision – that is, within 1 ten thousandth the breadth of a human hair, which, since the telescope has entered Space – they did! 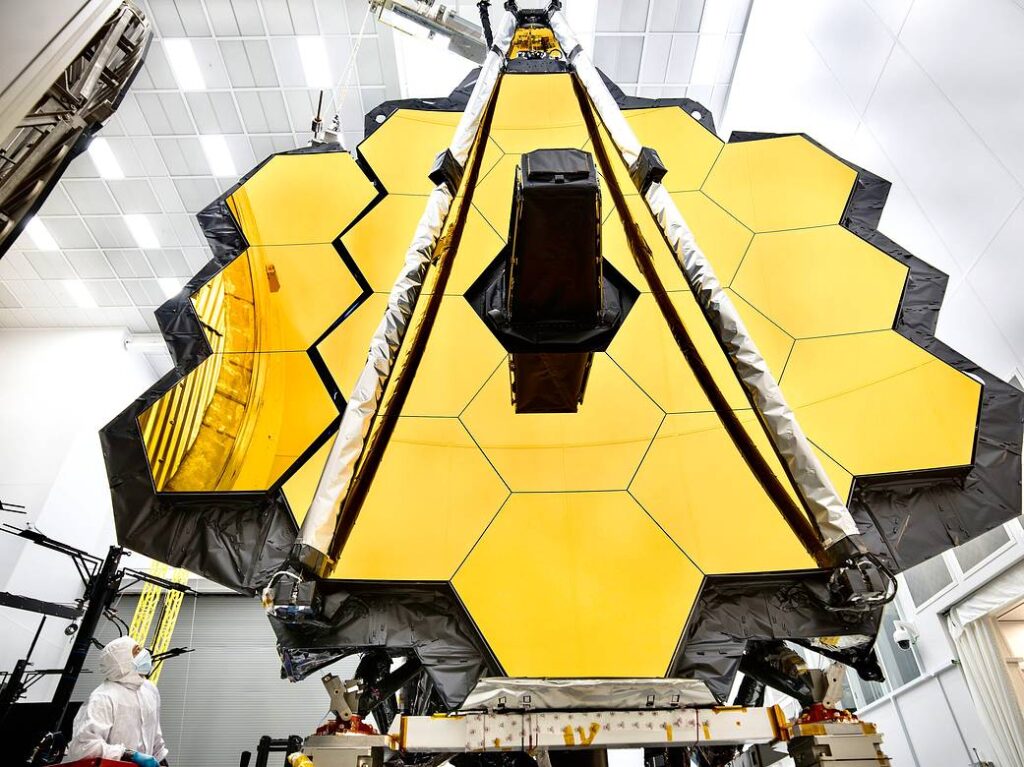 Caption: JWST’s folding primary mirror: coated with a 0.0001 millimetre-thick layer of gold that was vaporised and then sprayed on to improve the reflection of infrared light.
Credit: NASA/Chris Gunn

But it’s not just the sheer amount of faint cosmic light that Webb is able to harvest across its eighteen 1.33-metre-diameter tessellated primary mirrors that will enable this incredibly complex telescope to penetrate the depths of the visible Universe, but also the very high level of sensitivity at which its array of instruments and sensors can perform. Detecting ‘First Light objects’ in Space requires sensitivity at wavelengths longer than 1.7µm micrometres/microns. (1 micron – for those of us that don’t come across too many of them on the course of our daily rounds, is equal to one thousandth of a millimetre). This far exceeds the ability of the Hubble Space Telescope even after it was upgraded with the most-technologically-advanced (for that time) – Wide Field Camera 3 during the Space Shuttle’s HST Servicing Mission 4 in 2008. The JWST’s MIRI or Mid-Infrared Camera is its longest wavelength instrument, operating between 5-28 microns, which should enable Earth’s shiny new Space telescope to look the distance.

So, what are considered by scientists and astronomers to be “first light objects” in the Cosmos? The answer is ‘Population III stars’ or mini-AGNs (Active Galactic Nuclei). Population III stars are a hypothetical population of incredibly massive, hot and bright stars that are thought to have been the very first stars of the Universe. Being the first of their kind, astrophysicists are certain that they would have contained virtually no metal. This is because, if viewed in their prime, the full star life cycle would not yet be complete nor, in turn, would the process of nuclear fusion within that ultimately can produce the full range of elements, including the various metals.

For clarification however, JWST is not expected to be able to see any individual Population III stars directly. Instead, it is thought that Earth’s newest Space Telescope should be capable of detecting their larger end-of-life explosions (supernovae). Scientists believe this to be possible as it’s likely the supernovae of such heavy stars would be ultra-bright. Alternatively, they postulate that the supernovae might be visible as Gamma Ray Bursts (GRBs), the most powerful explosions in the Universe. Seeing for the first time ever – the “first light” objects in Space should ultimately help humanity better understand the great story of the origins of the Cosmos and unravel the mystery of how the first galaxies formed and grew into our known Universe. 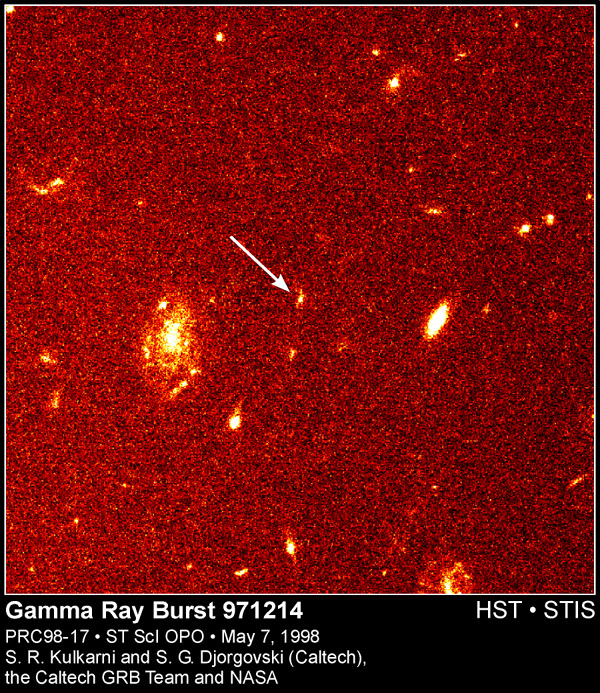 Caption: A powerful Gamma Ray Burst: for this object to be visible from as far as 12 billion light years away, it is thought the amount of energy released could have been equal to several hundred supernovae exploding at once!
Credit: S.R.Kulkarni/S.G.Djorgovski (Caltech)/Caltech GRB Team, NASA

So finally, based on what we know, what indicators will JWST and its operators use to identify “First Light” objects in Space? Firstly, by identifying galaxies with a much lower level of metallicity. Secondly, by the absence of older stellar populations. Older stellar populations would indicate that the stars (or supernovae) in Webb’s gaze are not in fact the first of their kind. The FL objects should also only have Spectral Energy Distribution (SED) ages as old as their first burst of star formation or younger. (SEDs refer to the plot of energy vs the frequency or wavelength of light). The third and final method the James Webb Space Telescope will use to identify first light objects in Space is using Galaxy Luminosity Function (or LF) which is the quantity of galaxies of a particular brightness within a single unit volume of Space, in other words – galactic density within a small patch of sky.

So lets keep our fingers and toes crossed and wish Webb well on its quest to search for first light!

Everything You Need to Know About Dwarf Planets

Written by Education Assistant Mark Grimley Today we are going to talk about some lesser-known bodies in our solar system – and one that you might still be upset about. These are the dwarf planets Read more…