It’s been just over two months since The James Webb Space Telescope was launched into space.  On Christmas Day 2021, Professor Michael Burton watched the launch online, whilst enjoying his Christmas dinner! 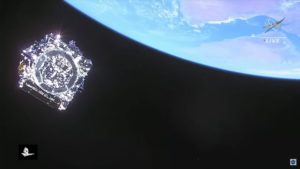 Humanities last view of the James Webb Space Telescope as it heads towards L2 after be launched from Earth by an Ariane 5 rocket (NASA/ESA).

So, what has happened since launch day and where is the telescope now? We find out more from Michael about the telescope and how his past work helped influence the infrared creation that is Webb.

Whilst Prof. Michael Burton has not directly worked on the Webb, his past research in astronomy contributed to elements in the making of the billion dollar, revolutionary and extremely sophisticated telescope.

In the early 90’s, Michael was involved in building telescopes in Antarctica, which as you can imagine is incredibly cold. It can reach up to 60 degrees Celsius below zero in winter.  Michael was making calculations for the design of telescope that would work in the infrared in Antarctica. The key here is in understanding the effect of temperature in determining how sensitive a telescope could be for infrared observations of the stars. 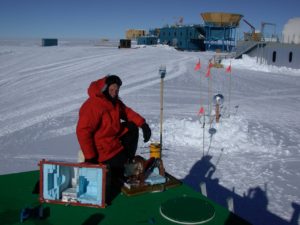 Michael Burton working on a telescope at the South Pole in 2004.

This central concept involved, of cooling down the telescope, is not too different from the idea that was adopted for James Webb.   Michael was exchanging ideas with colleagues in the UK and USA, including the (late) Tim Hawarden (Edinburgh) and Harley Thronson (Wyoming), who took this concept forward in what eventually became the Webb telescope. 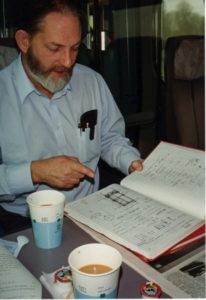 Tim Hawarden with his notebook sketching out the idea for a passively cooled infrared telescope in space in 1991. 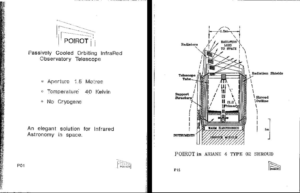 What makes The James Webb Space Telescope so special?

What makes the James Webb so special is that it works in the infrared portion of the spectrum, not the optical that the Hubble Space Telescope was designed for. Infrared is what we regard as heat radiation. Essentially, we all emit infrared radiation since we all are hot!  If you are trying to look at the stars in the infrared down here on Earth, it’s a bit like looking through an optical telescope in the daytime, with the lights on and the Sun out. The stars are there, but it is very hard to see them because of all the background light streaming in.

So, the key here is, for looking in the infrared, to reduce the heat load on the telescope by cooling it down so that its temperature drops.

Professor Michael explained further: “NASA has an airborne Astronomy programme that I was part of when working in California many years ago. Here the telescope flies in the stratosphere, well above the Earth’s surface where it is also extremely cold.  I was part of the discussions about how you make the most sensitive infrared telescope, even better than from a high-flying plane.  In a nutshell, you have to go into space, and you have to be able to then cool the telescope down.  That part, cooling it down, is not so easy.  You may think that space is extremely cold, but actually when in orbit about the Earth the temperature is similar to being on Earth as the Sun is always shining.  So, you have to work out ways to stop the Sun’s radiation from getting to your telescope.” 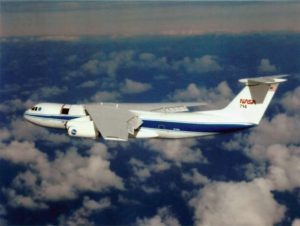 The Kuiper Airborne Observatory, flying above the clouds in the stratosphere.  The 1m diameter telescope looks out the hole cut in the fuselage, just behind the cockpit.

“Ultimately, with Webb, it has a series of sun shields that were opened after launch, one after the other. Each shield blocks off more and more of the radiation, and the telescope itself is at the very back, therefore completely shielded from the Sun. Another factor is that the telescope has to always be pointed away from the Sun and the Earth, and you have the find the right place to be able to do that. That is not possible for the Hubble Space Telescope. It’s a great telescope, but it’s also travelling around the Earth very rapidly, and is always changing orientation. You can’t cool the Hubble down very much so the idea came that its successor should be moved away from the Earth, to a place called the ‘Lagrangian Point’, also known as L2, where the Earth’s and Sun’s gravity are in balance.  L2 follows the Earth around the Sun, so a telescope placed there will remain in a fixed position with respect to the Earth. But bear in mind that L2 is around 1 million miles from Earth, that’s around four times further away than the Moon, so you need to be able to get the telescope there, as well to communicate with your telescope after doing so! 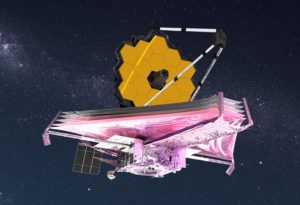 Artists impression of JWST at L2 exploring the cosmos (NASA)

The very same calculations that Prof Michael made to determine the sensitivity of telescopes when he was working in Antarctica, could be readily adapted to apply to space telescope.

When Prof. Michael was building telescopes for Antarctica, the discussion on what kind of telescope should follow Hubble in space was also going on in earnest. It takes decades for such telescopes to come to fruition.  Hubble took around 25 years from concept to its launch, going through many iterations in design.

Michael said: “When I was involved at the time, the idea for the Webb at that point hadn’t been fully worked out yet. There were questions around what Webb would be used for – what the waveband or science focus was, and what niche it would be in. It took a long time to work that all out.”

What is the purpose of the James Webb Telescope?

There is a six-month process from launch to get the telescope operational. It needs time to unfold the mirrors and align the telescope very precisely and then to cool down to just a few degrees above absolute zero. So far, all appears to be going well. It is the most sophisticated and sensitive telescope ever launched into space. There isn’t one specific scientific project for it to undertake, but the driving focus is its ability to look back to ‘the first light’; the first ever stars to form in the universe, which came into existence more than 10 billion years ago. Their light has now ‘redshifted’, meaning it has shifted from the optical into the infrared. That is why the telescope is infrared, to be able to pick this up.

The James Webb is also capable of looking for signs of life on other planets. The signatures for life elsewhere might possibly be identified via their spectral features in the infrared so you need a very sensitive telescope working at these wavelengths to be able to look for these features.

The James Webb Space Telescope has a distinctive shape

The telescope is designed so that it could fit into the launch vehicle, a European Space Agency (ESA) Ariane 5 rocket, therefore it had to be folded up to start with. Once launched, it then unfolded, similar to how a giant flower would open up. The hexagonal shapes that you will recognise on the telescope had to unfurl, and then be aligned together very precisely in order to capture the infrared light and bring it to a sharp focus.

Who gets to Observe using James Webb?

All scientists have the chance to write proposals that get judged by a scientific panel in order to get the chance to observe with Webb. This is a process that has been in motion for a long time. Some of the team at Armagh are collaborating with scientists who are working on Webb projects.

The role of the Planetarium & Observatory is that it is a regional node for communicating Webb to the public in the UK. We have already hosted several online events where the James Webb Telescope is discussed, as will continue to promote the work of Webb, its science and the scientists using it.