Astronomers using a network of radio telescopes across the entire planet have finally been able to take the first picture of the supermassive black hole at the centre of the Milky Way. Members of the Armagh Observatory and Planetarium were present to hear this news live. 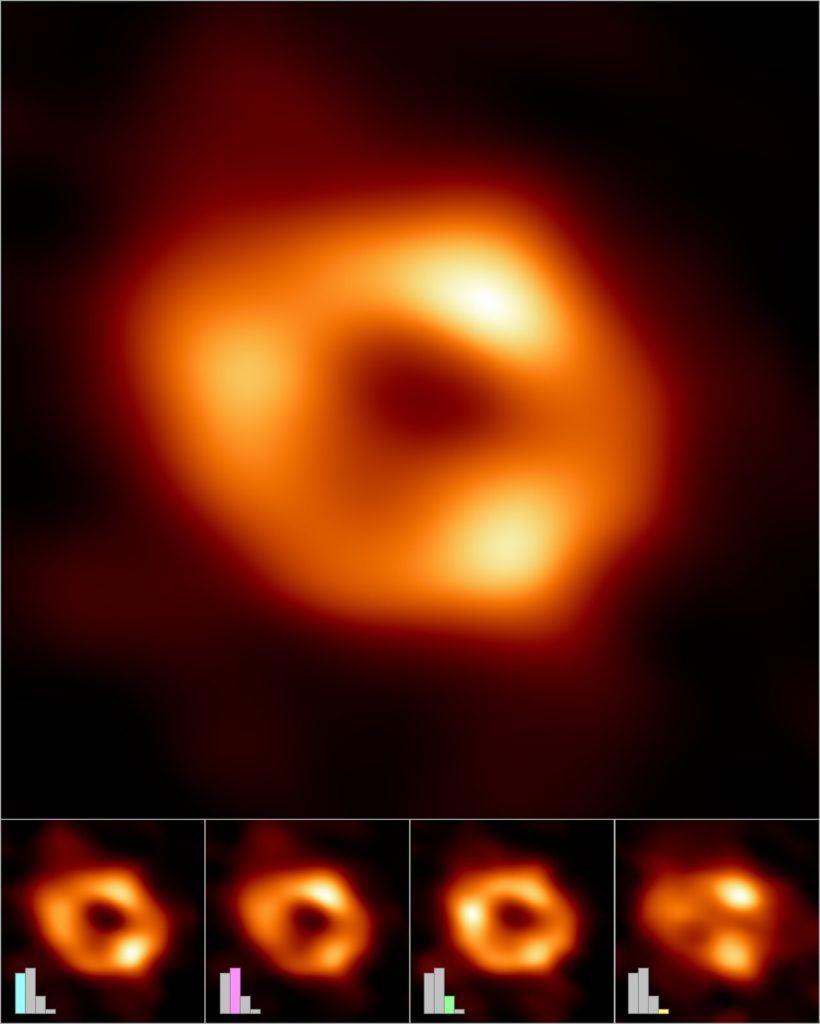 Commenting from Vienna, where he heard live about these results together with his research team, Dr. Marc Sarzi, Head of Research at Armagh Observatory and Planetarium said: “This is another great exploit by the Event Horizon Telescope collaboration, who already published in 2019 the first image of the supermassive black hole – or better of the incandescent material that closely moves around it – in the case of the giant galaxy called NGC4486 as it is known in the New General Catalogue of nebulae and clusters of stars compiled in Armagh in 1888.

“This is a very important result because it allows us to better understand how supermassive black holes behaves most of the time. Indeed, like most supermassive black holes in nearby Universe, the one at the centre of the Milky Way is currently fasting – so to speak – meaning that is not currently feeding on enough material to power the kind spectacular jets of energetic particles that we often see emerge from galaxies like NGC4486.” 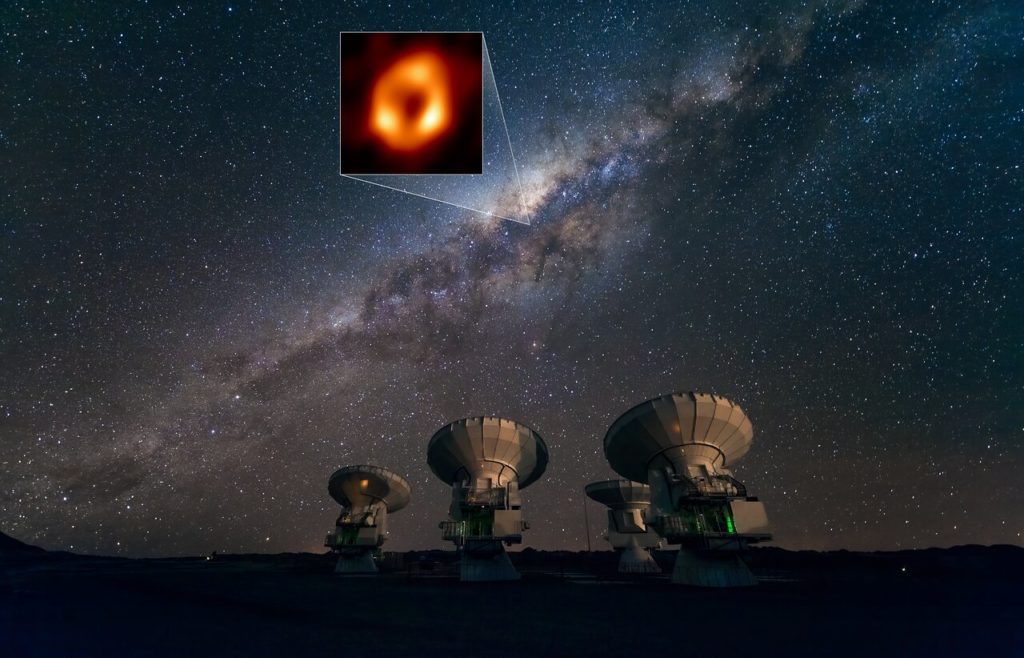 This image shows the Atacama Large Millimeter/submillimeter Array (ALMA) looking up at the Milky Way as well as the location of Sagittarius A*, the supermassive black hole at our galactic centre. Highlighted in the box is the image of Sagittarius A* taken by the Event Horizon Telescope (EHT) Collaboration. Located in the Atacama Desert in Chile, ALMA is the most sensitive of all the observatories in the EHT array, and ESO is a co-owner of ALMA on behalf of its European Member States.

Seen towards the constellation of Sagittarius, the supermassive black hole at the centre of the Milky Way has been known for two decades as the source of a compact radio emission – called Sagittarius A* – and measured to weight around four million times more than our Sun, by two independent teams who followed the motions of stars in the immediate vicinities of this black hole and who were awarded led to the 2020 Nobel prize their work. It is this radio source that was imaged with incredible accuracy by the EHT network – capable of seeing a hair’s breadth at the distance of 80km. The new breath-taking images for Sagittarius A* revealed the presence of material circling around the black hole in a very similar fashion to the much more abundant material going around the black hole in NGC 4486.

“This is where the similarity ends, however, ” adds Prof. Tim de Zeeuw, former director of the European Southern Observatory and who was also in Vienna at meeting organised by Dr. Sarzi.

“The supermassive black hole of the Milky Way is a thousand times smaller than the one in NGC4486, but material close to it still moves at a speed very close to the speed of light. This means that it takes less than 20 minutes for such material to circle around the black hole, constantly changing the appearance of the “doughnut”-like image of Sagittarius A*. This considerably complicated the work of EHT scientists but also allowed them to exploit this variability to also infer how the central supermassive black hole of the Milky Way spins and to deduce that its rotation axis is actually pointing towards us! This is an absolute first in Astronomy and a great accomplishment.” 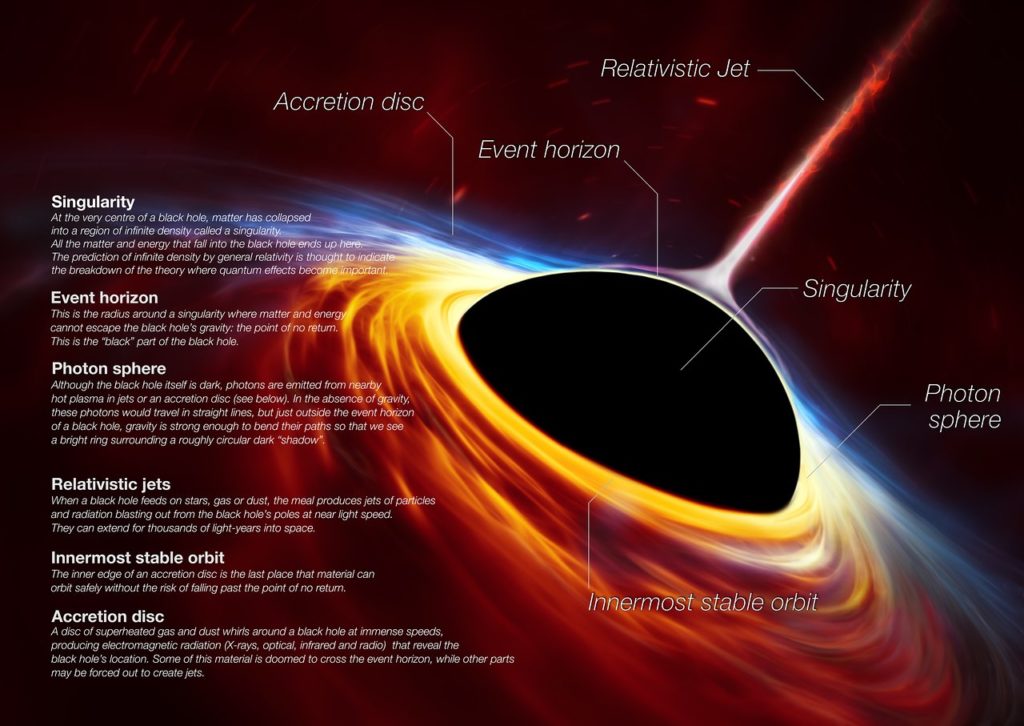 This artist’s impression depicts a rapidly spinning supermassive black hole surrounded by an accretion disc. This thin disc of rotating material consists of the leftovers of a Sun-like star which was ripped apart by the tidal forces of the black hole. The black hole is labelled, showing the anatomy of this fascinating object. Credit: ESO