Finding the First Pulsar in the Armagh Planetarium with Jocelyn Bell

The story of Jocelyn Bell Burnell’s discovery of pulsars is one of the best known in astronomy. The story of how, as a graduate student at the University of Cambridge, she detected “a bit of scruff” on the chart recorder of the radio telescope designed by her supervisor Anthony Hewish. A telescope that she’d built in 1967 as part of her PhD – the Interplanetary Scintillation Array at the Mullard Radio Astronomy Observatory in Cambridge.

The bit of scruff turned out to be what is now known as pulsar PSR B1919+21, the rapidly rotating neutron star that is the collapsed core of a massive star, just a few kilometres across and spinning with a period of 1.3s. The jet of radiation from this neutron star was what was being measured as the pulsing radio signal. Of course, at the time this was a completely new phenomenon. Subsequently, the consequences for astrophysics were profound. However, right then, even proving that the signal seen on the chart recorder was coming from a cosmic source and was not interference was challenge enough. Trawling through many metres of paper from the chart recorder, Jocelyn was looking for faint signals on a noisy background that repeated at the sidereal rate (i.e., 23hr 56m), rather than the solar rate (i.e., 24 hrs). Once the team were convinced that the source was indeed cosmic, and not terrestrial in origin, they then jokingly dubbed it LGM (little green men, later LGM-1 as a second was found), so unexpected and unusual it was, seemingly more akin to an artificial signal that a natural one.

The signal from PSR B1919+21 as measured on 15 December 1967, the first pulsar discovered by Jocelyn Bell. Nicknamed by the discovery team “LGM-1”.

This story is well known, many articles, discussions, even TV programmes, have been devoted to it. Not so well known is the story of how Jocelyn learnt where on the sky her remarkable new object lies. As a radio astronomer, working through the day (as well as the night!) the stars are not visible to the eye. How does one recognise the constellation (Vulpecula – the little fox) that the source is found in? Jocelyn wanted to know. 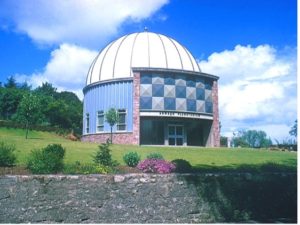 The Armagh Planetarium after opening in 1968.

Here Jocelyn’s origins from Northern Ireland come in. She lived in Lurgan in County Armagh. Her father, Philip Bell, was the architect for Armagh Observatory, one of the world’s oldest optical observatories, one that has been in continuous use since its foundation in 1790. Architect here was an official government position with responsibilities for looking after the observatory building, not actually designing it. Jocelyn had grown up experiencing Armagh Observatory from the inside, including following her father around the ducts under the roofing when he was fixing leaks and making repairs!

In the mid-60’s the Armagh Observatory Director, Eric Lindsay, had, following a 2-decade campaign, managed to raise the funds to add a Planetarium to the Observatory, to meet the growing demand for public outreach alongside its scientific mission. Joceyln’s father then became the architect for the Planetarium as well, responsible for designing its innovative, striking dome. In turn, the Dome became an iconic symbol of the space age in Armagh for this was also the era of the Apollo Moon programme and featured strongly in the Planetarium’s public programmes. 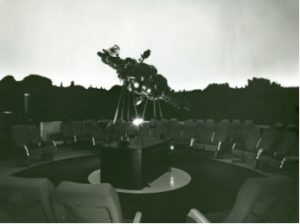 Armagh Planetarium’s first projector in 1968, the GOTO Mars, made in Japan.

PSR B1919+21 was discovered on 28 November 1967. The next month Jocelyn was back home in Armagh, and with her family, for Christmas. The Planetarium had just been completed. The roof was in place and, protected from leaks, the first projector (a GOTO Mars projector from Japan) freshly installed under the guidance of the Planetarium’s first Director, Patrick Moore (who later became an icon himself as the presenter of the BBC’s Sky at Night). Jocelyn, of course, wanted to see the new Planetarium, even though it had not yet opened to the public. She also wanted to know the location of her LGM on the sky.

Vulpecula is in fact neatly sited in the middle of the Summer Triangle – the asterism made up by the three bright stars of Altair, Deneb and Vega. So, while it is a rather modest constellation with no stars in it that are brighter than 4th magnitude, Vulpecula can be readily located in the sky using the Summer Triangle as a guide. So, Patrick Moore was well able to show Jocelyn where the constellation lay. However, the reason why Jocelyn was so interested in Vulpecula had to remain a mystery, for she could not then tell the story of the LGM. It remained a secret, only known to the research team!

The reason for this is, of course, now history, for it was the location of the first known pulsar! Half-a-century later, when the Armagh Planetarium was celebrating its 50th anniversary, we were honoured by Jocelyn visiting us and telling us about

her own first there and of finding where Vulpecula is on the Dome. We even recorded a short planetarium show where she narrates this story and we show you Vulpecula in the Summer Triangle using our very latest Digistar projector, now in the age of the digital planetarium and the immersive experience it provides! 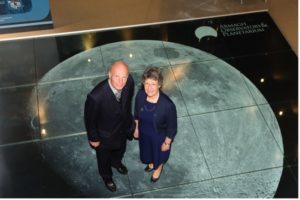 Jocelyn Bell Burnell with Armagh Observatory and Planetarium Director Michael Burton at the 50th anniversary of the opening of the Planetarium in 2018.

Written by Michael Burton, Director of the Armagh Observatory and Planetarium