Armagh Observatory reports that December 2021 was wetter, warmer, and duller than average.  The month was remarkable for an unseasonably very warm period beginning near the end of the month and lasting through the New Year.  This was also the wettest December at Armagh for six years, and the dullest for three years, that is, since the exceptionally dull December 2018.

Calendar year 2021 was remarkable in several respects, including an exceptionally warm spell in July contributing to an equal third-warmest summer at Armagh (16.2 C), the warmest September on record (15.5 C), the warmest autumn on record (11.9 C), and the second-warmest year (10.5 C) since records began at Armagh around 1795.

December 2021 was remarkable for a spell of very warm weather around the end of the month.  According to the UK Meteorological Office, this was caused by low pressure to the west of Ireland drawing a stream of warm Atlantic air from the south-west over much of the country.  Usually, but not always, the highest temperature each day occurs in the afternoon, but on this occasion the stream of warm Atlantic air led to a sequence of maximum temperatures occurring at night.

Here, the first high maximum air temperature was 12.6 C, which was observed to occur close to 09:00 GMT around the time of the weather readings on the morning of the 29th.  As this was the highest temperature recorded during the previous 24-hour period the value was attributed to the 28th.

The wettest day was the 25th with 24.5 mm (0.96 inches) of rainfall, followed by 18.1 mm on the 6th and 15.1 mm on the 7th.  The latter two measurements were associated with the passage of the damaging Storm Barra.  This year’s Christmas Day was very wet, the third-wettest Christmas Day on record at Armagh and only slightly drier than Christmas Day 2015 (25.0 mm).  With an average temperature of 7.5 C Christmas Day 2021 was slightly warmer than the mean December air temperature at Armagh.

Gulls were seen on several days, the 13th, 14th, 17th, 20th and 22nd, with a particularly large number on the 17th circling continuously and moving slowly in a north-easterly direction.  A large number of gulls were also observed flying in a north-easterly direction around midday on the 20th.  The frequency with which gulls have been seen this year over Armagh suggests that a colony of gulls may have become established near the city.

Rainbows were seen on the 4th and 6th, with double rainbows on the 4th and 10th.  Hail was observed on the 4th, 6th, and 7th, with sleet and snow on the 6th though no snow cover.  Wind from Storm Barra reached gale force on the morning of the 7th, causing tree damage and damage to the Observatory’s sunshine tower.

Calendar year 2021 was a record-breaking year though with roughly average sunshine and precipitation.  It was the warmest year at Armagh for 14 years and the second-warmest calendar year since daily temperature records began at the Observatory around 1795.

Therefore, despite some very dry and some very wet months, rainfall – as so often happens – averaged out over the year.  Indeed, there is very little evidence for precipitation either systematically increasing or decreasing in the long term at Armagh.  Similarly, the total number of hours of strong sunshine at Armagh during calendar year 2021 (1284.1 hours) was very close to the 140-year (1881-2020) long-term average of 1285.2 hours and the most recent (1991-2020) 30-year average (1281.0 hours).

May 2021 was very cool, the coldest May at Armagh for six years, though this was compensated by a warm late May bank holiday.  The month was also very wet, the wettest May at Armagh for 18 years, leading to the remark that it sometimes felt as if April showers had come a month late. The month was sunnier than average, and this led to meteorological spring at Armagh being sunnier than average, though cooler and with about average rainfall.

This record-breaking month was followed by a warmer than average August that was slightly wetter than average and the dullest August at Armagh for 13 years.  The 31st recorded one of the highest August pressures on record at Armagh, a value (reduced to mean sea level) of approximately 1035 hPa.

October was the warmest at Armagh for 15 years, sunnier than average and with about average rainfall.  It was an unusually calm month with no named autumn storms.

These two months were followed by an exceptionally warm November, memorable for grass growing throughout the month and for leaves remaining on some trees right up to the end of the month.  November 2021 was also very dry, the driest November at Armagh for 32 years, and duller than average.

Miscellaneous weather notes during 2021 included a report of silent lightning on March 26th and a rare, spoked rainbow seen from Clogher on the evening of the July 12th.  During the year, a wide range of birdlife has been reported, including gulls, swallows, swifts, ravens, rooks and crows, buzzards, and kestrels, as well as a jay and fieldfares. 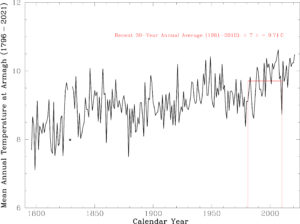 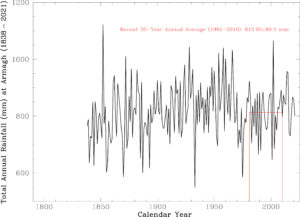 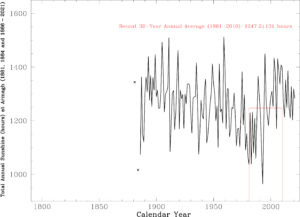 Such figures hide significant month-to-month variability but illustrate the characteristic year-to-year variability of the weather at Armagh. Prominent features include multi-decadal oscillations and a general rise of mean annual temperature with time, the latter contrasting with a nearly constant average level of total annual precipitation, and a recent increase in strong sunshine reversing a previous downward trend.

These data refer to observations at Armagh Observatory, which has been recording the weather at Armagh since 1795.