A number of Armagh astronomers travelled this week to the University of Warwick in England to take part in the first `in-person’ UK National Astronomy Meeting since 2019. Over 800 people participated either in person or remotely. For many PhD students it was the first big meeting they had been to. From Armagh, Erin, Chris, Kerem, Gautham, Rok and Nived all gave presentations either in-person or remotely.

The five days of the meeting were split into ‘plenary’ sessions which were open to all and a series of ‘parallel’ meetings which were more specialist. Lunch time sessions were devoted to topics such as Diversity in Astronomy, Sci-Art and Careers. Evening events included the keenly anticipated Football tournament (I believe the team from QUB won!) and a trip to Kenilworth Castle.

The initial results from JWST were amongst the plenary sessions. Some of the images were very impressive, as was the technological achievement of bringing such a hugely difficult project to a successful start. However, my view is that it is the spectra from star forming regions; galaxies (both near and far) and exoplanets, which will provide the real scientific interest. 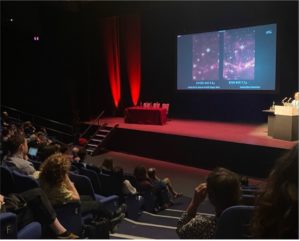 George Efstathiou from Cambridge asked, ‘Do We Have a Standard Model of Cosmology?’ The answer was … ‘yes’ … ‘but’ … we don’t understand inflation, dark matter or dark energy. Moreover, is the Lambda Cold Dark Matter model just a fitting function (and not telling us anything)? In George’s view, there hasn’t been a paradigm shift for 40 years since the development of inflation which predicts the universe rapidly expanded in very earliest fraction of a second after the big bang. His ‘best bet’ would be the detection or discovering the nature of dark matter.

Other talks which stood out (at least for me) was Richard Horne from British Antarctic Survey who outlined the effects of Space Weather on satellites. In the 1980’s many high-profile satellites failed and insurers found it difficult to assess risk. They started giving contracts to Solar and Plasma Physicists to help. He noted that many low earth satellites (starlink etc) have been launched in recent years during Solar minimum and will be interesting to see how they survive during the approaching Solar maximum. Finally, it was great to see work from the Gravitational Wave community which is generating more complex waveforms which are needed to better model the data expected from the next Ligo/Virgo observation runs starting the Spring of next year.

Finally, but perhaps most importantly, it was great to see many friends and colleagues in the `real world’ for the first time since before the pandemic. I’ve seen many on Zoom every week, some several times a week, and saw at least one new colleague for the first time in person. However, the biggest shock was to remember how tall many of them were … either that or I’m getting even smaller … (everyone appears to be the same size on Zoom!). I did hear someone telling a colleague they didn’t recognise them without their usual background …. 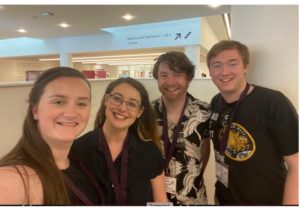 Before next year’s UK NAM at Cardiff, there will be the Irish NAM at Dunsink in Sept this year, where Astronomers from AOP will be taking part.